THE HISTORY OF HAMPTON BAYS

The area now known as Hampton Bays is surrounded by sandy hills, Pine Barrens, marshland and dunes. It was once teeming and continues to have some of the wild fowl, deer, muskrats, raccoons, scallops, clams, oysters, crabs, and all varieties of fish.

English colonists arrived in 1640 to establish Southampton Village, and settler John Ogden obtained a land grant in 1659 for lands west of what is now the Shinnecock Canal. The land was used for hunting, fishing, and harvesting of marsh grasses and plants. The area of “Good Ground” was laid out in 1738 and included a number of smaller communities, Red Creek, Squiretown, Canoe Place, Ponquogue, Springville, Rampasture, East Tiana, West Tiana and Newtown. These settlements still exist as neighborhoods and many descendants of the original settlers still live here.

During the Revolutionary War, British officers occupied the Canoe Place Inn while several hundred troops were stationed at the fort located on the hill behind the Inn. The fort, which commanded views of South Country Road (now Montauk Highway), Peconic and Shinnecock Bays as well as the Atlantic Ocean, was a strategic location worthy of fortification. Canoe Place Inn is reported to be the oldest inn site in the United States.

Early settlers farmed, fished, and engaged in the fishing and whaling industry. Most long distance transportation was undertaken by water until the introduction of the Long Island Railroad in 1869. The railroad opened up the area for tourism, and many boarding houses and hotels were built in the 1880’s for families seeking a vacation away from the city.       The Long Island Railroad had a weekend schedule that accommodated travelers wishing to come to Good Ground for a day of fishing, and the railroad provided a special train car to hold the fish catch on the return trip.

The demand for lodgings increased as the popularity of the area grew. The largest hotel was the Hotel Clifton, which was located near the ocean and could accommodate over 100 guests. The hotel provided such luxurious accommodations as billiard rooms, tennis courts, and bathhouses. The name of the hamlet was eventually changed to “Hampton Bays” to further capitalize on the reputation of the Hamptons and its waterways. 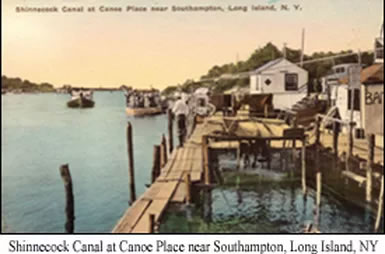 Eventually, some tourists with means decided to build their own summer residences. Estates of up to 500 acres were built, most of which have since succumbed to fire, storms, or demolition.

The economic boom was expressed in the boutiques built along Main Street. Old photographs document beautiful shops such as the Grande Maison de Blanc, a fine linen shop, Ovington’s china and crystal store, Finchley’s haberdashery, and the Lyzon Millinery Shop, which filled orders from Paris ladies’ hats. This area of Main Street was once known as the “Fifth Avenue of the Hamptons.” Several buildings still exist, including the Lyzon Hat Shop that has been obtained by the Hampton Bays Historical and Preservation Society.

Many beautiful estates and historic sites have been lost. The most notable of these was the fabled Shinnecock Lighthouse, which was in its time one of the tallest structures along the Eastern coast. This beloved landmark was controversially demolished in the 1940’s.

A few historic structures have been saved largely through the efforts of the Hampton Bays Historical & Preservation Society. These include the original St. Rosalie’s Church, the Canoe Place Chapel, the King House, and the Lyzon Hat Shop. Other historic structures.

The famous Canoe Place Inn had its origins in Mr. Herrick’s home or in the home of his predecessor has not been determined. Records show that the inn was the only house in the wilderness between Riverhead and Southampton. Stephen Herrick’s son, George, purchased the property from his siblings and operated the inn sometime after 1756 until 1785 when he sold it.

During his proprietorship, the inn served as a home to British officers during the American Revolution. (Research by Henry W. Moeller) The officers were there because the British maintained a fort consisting of over two acres of earthworks located on the hill behind the inn that overlooked the main road and the isthmus at Canoe Place. Its location straddled both Peconic and Shinnecock Bays. In 1921 the Canoe Place Inn burned to the ground with the exception of two chimneys that survived the fire. The inn was later rebuilt and enlarged. It is reported to be the oldest inn site in America by historian, Elise Lathrop who researched, Early American Inns and Taverns.

Today, the community is involved in saving the historic Canoe Place Inn, east of the Shinnecock Canal within Hampton Bays, NY. We value your support, let your voice be heard and send letters to Southampton Town in efforts of saving a historic landmark within Hampton Bays.