As we continue to celebrate Women’s History Month in this Year of the (Coronavirus) Woman, we introduce a young lady from our hamlet who many have probably forgotten or did not know ever existed. 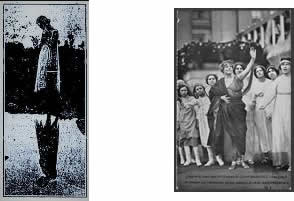 Solvejg Hornbeck (the J is apparently silent) was the daughter of Henry Hornbeck, piano tuner and builder. The Hornbecks lived in the city as well as East Hampton, Sag Harbor, Southampton and finally Hampton Bays, though not in a mobile home park, as the list above would seem to suggest.

Solvejg was a classically trained dancer. She was a student of Isadora Duncan and spent the summer of 1917 training at the Florence Fleming Noyes Summer School of Rhythemetic Expression – which we assume means dance. Ms. Noyes was a well-known dancer, as well as an activist known for dressing as Liberty as part of a Washington DC tableau highlighting the fight for women’s suffrage. This school is still running and, interestingly, their website states Ms. Noyes started the school at her summer home in 1919. It seems Solvejg was a woman ahead of her time.

According to the various newspapers, Solvejg was entertaining the local community with her dance since she was “a mere slip of a girl.” Performances of Terpsichorean and Greek dance were given at Mianokma Hall in East Hampton.

Hmm. Terpsichorean. It means “of or relating to dance.” So, a dance dance. That is not a helpful description. Terpsichore itself – or herself – refers to a Greek muse, one of the nine daughters of Zeus, like Olivia Newton John, but without roller skates, who specialized in inspiring dancers. Or it is the name of several historical British warships, but we are guessing that has little to do with a dance style, though it does make us wonder what the Royal Navy has been getting up to.

So, Solvejg danced at Mianokma Hall, as well the Maidstone Club and the Capitol in Riverhead, to benefit the hospital, local churches, the Lions Club and other charities. She spent part of her days in New York, where she performed at the Metropolitan and posed for some film corporations – whatever that means. Often she was accompanied by her father Henry, a pianist. She also hosted a school and classes for girls of all ages. Solvejg also appeared on Broadway, with her future husband, in The Student Prince.

We are not quite sure what happened to Solvejg. She married her dancing partner Willard Fry and seemingly disappeared, at least from our local newspaper archives. But since she lived here, perhaps there are some family or friends still here who can tell us whatever happened to her. You know, crazy Aunt Sally, the dancing muse?