Last week’s missive was a bit premature, Flag Day was a few days after we published. This week, we are sorry to say, we are a bit tardy. Still and all, it seems like a topic that may be of some interest.

It was June 13th, 1942, just after midnight, when four men landed on the beach in Amagansett. What was so special about this event? Well it was during World War II and the men were there at the order of the Abwehr, Nazi Germany’s intelligence agency. Yes, Nazis landed in Amagansett. Operation Pastorius, named for Franz Daniel Pastorius, said to be the first German immigrant to the fledgling United States, also known as “Franz Daniel Pastorious Undertaking” to the British, involved German spies landing in Amagansett as well as in Florida’s Ponte Vedra a few days later.

The entire Operation included 12 men, according to some stories, although counting the identities mentioned in the various stories we only come up with 8 at best. Not sure whether we lost the ability to count or the internet is fibbing. Be that as it may, the purpose was to blow up the ALCOA plants, which were vital to the production of aircraft and military vehicles. The closest plant was located in Massena, New York – closer to Montreal than any other place you are likely to have heard of – with other plants in Mobile Alabama and Cleveland Ohio. None were exactly on a direct path from Amagansett, but this does not appear to have been the best thought-out plan.

The Germans involved were all German-born men who had lived in America for years. The leader of the Amagansett group, George John Dasch, had lived in the USA for 19 years and served in the Army before being persuaded by his mother to return to the Motherland. Dasch pretty much decided before landing on US soil to rat everyone out and defect to the US. After having lived in the USA and then returning to Nazi Germany, it is said that he was a bit disillusioned.

The group arrived via submarine and was almost immediately discovered by Coast Guardsmen John Cullen of the Amagansett Station. The agents offered him a bribe to stay quiet, which he took, before beating it back to the Station and raising the alarm. Good man. 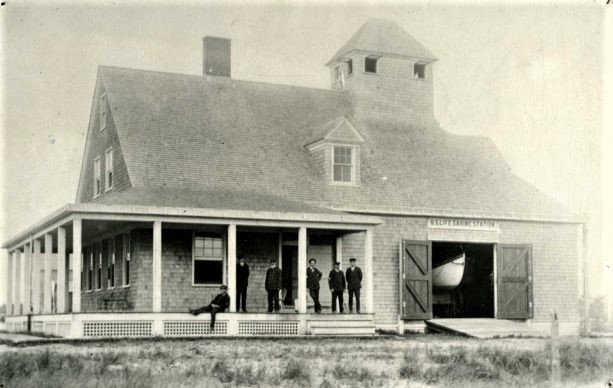 The rest of the story and the details which were rushed over here, can be found by visiting the Amagansett U.S. Life-Saving & Coast Guard Station. You can visit their museum right after you finish up at ours.

Have we mentioned we are now open Saturdays from 10 -1?

Unfortunately, you missed this year’s annual reenactment of the beach landing, but keep an eye out for next year.

What happened to the spies you ask? Well it seems that they headed to the Amagansett train station and took a train going west. Yes, after midnight; there were a lot more trains running back then. The spies were ultimately apprehended. For those purists, please keep in mind that the train would have had to run through Hampton Bays.

Dasch and another agent, Ernest Burger, arrived in the city and decided to contact the FBI. Unfortunately, when they made the call, the agent who spoke to them thought it was a crank call and dismissed it (a recurring theme throughout history). Dasch then travelled to Washington DC and spoke to the agents there, who again thought it was a story. Finally a bag of cash containing $84,000 convinced the agents that Dasch was on the up and up. They then interrogated him for 8 days.
Within two weeks, all the participants were rounded up without ever having caused harm on our soil. Dasch and Burger were ultimately deported back to Germany, while the rest of the sabetours didn’t fare quite as well. Spies in wartime, you understand.

Should you be interested in the details as seen through Dasch’s eyes, he wrote a book in 1959 detailing his interaction with the FBI and J. Edgar Hoover. Eight Spies Against America. https://www.amazon.com/Eight-spies-against-America-George/dp/B0007DKM94