Keeping to the Women in History pattern, today we are going to give you a bit of insight into another local lady who some of our older folks may well remember. Dorothea (aka Dorothy) Sophia Puchmuller Francis was born in Laatzen Germany in 1867 and emigrated via England to the United States, much to the consternation of the record keepers at Ellis Island. She was the daughter of Henriette Friederike Wilhelmine Pape and Heinrich Friedrich Wilhelm Puchmuller.

For those of you who have long read these missives, you may recall another Puchmuller, August Wilhelm, who owned an Inn in East Quogue as well as Ernest (aka Ernst Christian Puchmuller) Buchmuller, who owned and operated the Canoe Place Inn. Dorothy (aka Dorothea and sometimes Dolly) was Ernest’s sister and August’s Aunt. 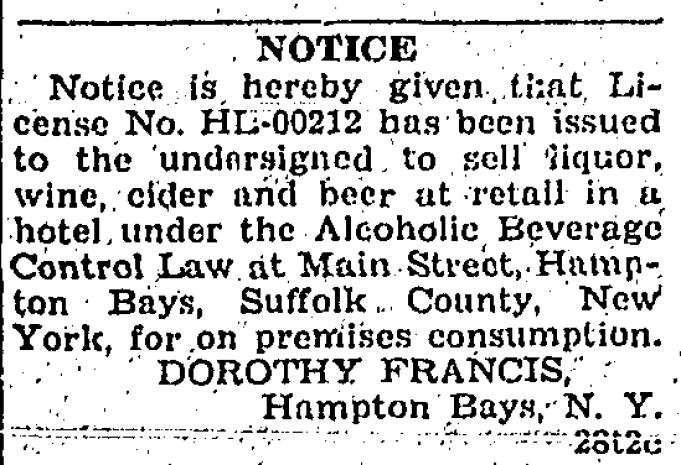 You may also recall we were fortunate to meet Dorothy and Ernest’s great (?) nephew and his lovely wife, who journeyed from Germany on a genealogical journey to see how their relatives lived. The Canoe Place Inn restoration was in its infancy at that time but they enjoyed seeing it none the less.

Dorothy first immigrated to England, where according to her family, she worked as a service worker in a boarding house. Astoundingly, in a years in the future newspaper article – about her unborn daughter, also Dorothy (aka Dolly), being in a car accident – we learned that the elder Dorothy worked for the Duke of Connaught (aka Prince Arthur, seventh child of Victoria and Albert) and Lady Leach of Feifie (who unfortunately, only seemed to have that one name and we – and Google – have no clue who she was – except that Arthur’s son, also Arthur, married the daughter of the Duke of Fife, so Feifie may be a different spelling of Fife). Yet another example of the interesting nuggets culled from the old newspapers and an example of why you should not name your children after yourself – it is just too damned confusing.

Why the young Dorothy running into a ditch in Mastic would mean that her mother’s work history would be mentioned is beyond our ken – we are sure the Puchmuller/Buchmuller/Francis families will be tickled to learn this. Dorothy met her Canadian husband Frank Francis in England, marrying in 1895. They had five children before immigrating yet again in 1909 to the US.

It is believed that the move to the USA was encouraged by Dorothy’s brother Ernst/Ernest Puchmuller Buchmuller. According to documents, the Francis Family’s destination was none other than Good Ground and the Canoe Place Inn. Dorothy continued as a maid, while Frank was a waiter. Frank retained the position as head waiter at the Inn until 1917, just after Ernest passed away.
.
Dorothy and Frank decided to move on to their own venture, The Three Star Inn! For those of you not familiar with the origins of the name, three of the Francis boys – Frank, William and Albert – served in World War I. It was a custom in World War I for families to display a flag in the window with a blue star for each son in the war – or a gold star for any that died.

The Three Star began its life as a tea room, according to the same article that tells of Dorothy’s tenure with royalty. This newspaper scribe dug up some good stuff – glad young Dorothy was unhurt in the accident, but us historical types are tickled she was in an accident to begin with!

Somewhere in all of this, Dorothy gives birth to two more children and the tearoom morphed into a restaurant complete with home cooking and live music and dancing. According to a variety of newspaper ads, by 1923 the Francises let rooms upstairs providing “First Class accommodations for motoring parties,” while serving daily Table De’Hote dinners (think prix fixe), with seafood not surprisingly a specialty. A year later, the dining room had been enlarged and they were the proud owners of an electric violin and piano and they’d gained a phone number.
By 1934 newspapers are advertising the Three Star Inn managed by James Scotti and Budd Wall, but a month later it was Scotti’s Three Star Inn and Budd evidently had been kicked to, um, the Wall.

At some point it reverted back to the Francis Family. A lack of newspaper ads leaves us without the details. Although residents remember the many family members fondly.

The building was recently torn down, replaced with a medical building; it was just east of the King Kullen. It had many names over the decades, including a few years as Porky’s. Ahem.

As to Dorothy herself, well, we do not know that much about what happened to her and her Frank after selling the inn. Undoubtedly the family knows and can bring us up to speed. We assume they are mostly dead and, what with Dorothy being born in 1867, they are probably better off that way. But it sounds like they had interesting lives and fulfilled a few dreams along the way. What more could you ask?