A Christmas Tale with Great Porpoise 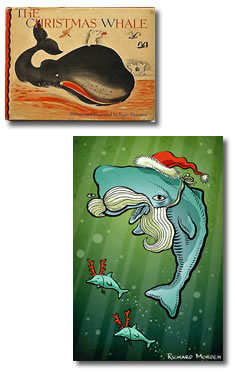 No, it wasn’t me spouting off. It was the whales. What whales? What a silly question.
The Christmas Whales of course.

Never heard of them? Well, there was a book called The Christmas Whale, published in 1945 – Santa’s reindeer get sick and a whale comes to his rescue – but that is not what we are talking about.

Read on…
On December 24th, in the Year of Our Lord 1885, a whale was spotted off the shore of East Hampton, bringing tidings of great joy to the local residents. (We have it on good authority that the whales swam by Good Ground on its way east.) While whaling was often done by ocean-going vessels, a whale in sight of the shore became a bonus for the local economy.

A team, already organized for the purpose, came together and went out in two small boats to pursue and capture, eventually, two whales. It was hours of hard labor and, once the battle was over, they rested for an hour before even trying to head home, dragging their catch, arriving back at the beach after midnight. Then there was a week’s work to carve up their catch and produce the oil and bones, which they sold for what they would consider real money. People arrived from all over to witness the sight.

Yes, we can just about hear you all squirming in your seats. Killing whales sounds perfectly horrible to our modern ears. But these people, our ancestors, were farmers and fishermen and just trying to eke out a living any way they could. They were no more horrified at killing whales than they were at killing fish, deer, pigs, cattle, sheep, or chickens – a good thing for us, else we might not be here. They lived in a world where people still regularly died of starvation, malnutrition, or from exposure. They would only have thought about what that $3600 would do for their families.
It is also a point that, while whaling was fatal for the hunted, it also often killed the hunters.

So be happy that you live in a world where whale oil has been supplanted by petroleum and vegetable oils. There is very little whaling anymore and we don’t need their oil to make our Christmas bright, literally or figuratively. We will leave you with that happy thought.