A Storehouse of Knowledge

“National Library Week is an annual celebration highlighting the valuable role libraries, librarians, and library workers play in transforming lives and strengthening our communities.” So says the American Library Association.

Happy Library Week! Unfortunately, we aren’t able to enjoy the celebrations at our wonderful library this year, but it seemed like an opportune time to take a glance back at our library’s history.

As with many establishments, our library has had a few starts and stops. In 1922, a group of library enthusiasts met with the staff of the Rogers Memorial Library in Southampton Village to help begin plans for a library in our hamlet. After all, you can’t wake a hamlet without making begs.

The folks at the Rogers Memorial generously agreed to lend us fifty books each month and duplicates would be donated to grow our bibliotheca. Our volunteers returned home in search of a building to use. A grand event was held at Jackson’s Hall with the Girl Scouts putting on a presentation and the “Lone Scouts (Boys)” canvassing homes for donations of books. A constitution was voted upon by 97 members. In 1923, benefits were being held around our hamlet to raise funds for a library. A card party at St. Mary’s and a food sale at Jackson’s Rest-a-Bit were two events organized by the Library Committee.

The president of the committee was Mr. McCall, an “energetic and spirited man” who also doubled as the school principal. He spearheaded opening the library in the home of Mrs. Alex Loughran on Ponquogue Avenue, who was generously providing two heated and well lit rooms for the endeavor. Books were being gathered and an opening in the near future was hoped for. Plans for a somewhat elaborate separate structure were kind of underway, but were not, at that time, fiscally realistic.

March 1st of 1923 was the opening of the library and those having paid yearly dues of $1 – or the easy payment plan of .25 a quarter – were issued cards and welcome to Mrs. Loughran’s home. Note the lack at the time of a library district and the power to tax, just a community donating time and money to a good cause.

In 1931, the Library was mentioned in the local papers for having attended the 13th anniversary of Eastern Long Island Libraries – you know that had to be quite the party.

And after that?
We do not know, really. For a few decades, mention of the library – in local papers, anyhow – sort of stalled. Did we still have one? Did it leave Chez Loughran for some other venue? The past is a bit foggy here.

There is a good source for information on the library. Where? Well, the library, of course. Problem: it is closed, along with the rest of Western Civilization. So maybe we will have to come back to this in the hopefully not too distant future.

What we do seem to know is, a 1954 article on our fire department mentions their close proximity to the library, which agrees with some personal memories, the building on the east side of the firehouse, which recently held an AT&T phone store. In 1963 there was talk of a new street light by the library on Ponquogue, yet a 1964 article on the state of the Library in 1963 seems to indicate that the new (present) library was just then under construction.

A note from Jack Capone indicates that the original phone operator’s house, which was in the same location as the current telephone building, just south of the railroad tracks on Ponquogue, was picked up and moved to the new library location and served as the core of the new facility. Yes, they used to move buildings all the time, it seems, probably where the idea came from for the game Monopoly.

So, minor mysteries abound. When did the library move from Mrs. Loughran’s to Montauk Highway? Was there always a library in those years (1923 to 1954)? Or did it close down and come back years later? Between the 1954 version and the current location, might the library have moved somewhere else, if only temporarily? Perhaps grayer heads may recall.
Or perhaps we will shelter in place in the library some evening, when nobody is looking, and look it up. 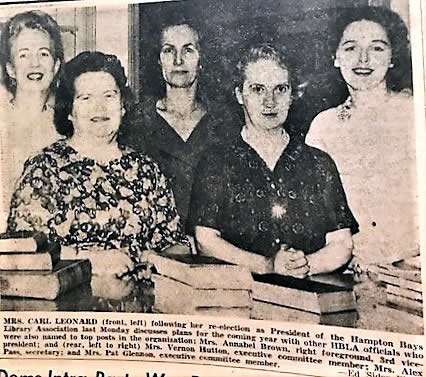