Camping on the Beach

Join us as we take a quick trip down memory lane with this lovely lady, Isabelle “Babe” Penny Creef. 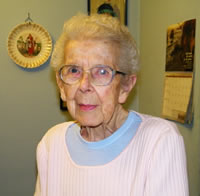 Our family used to love to go camping. There must be some Gypsy blood in us.
Two places I particularly remember were Peconic Bay in Hampton Bays and Springy Banks near East Hampton. Our spot in Hampton Bays was East of what is now Meschutt Beach. I don’t know who owned the property then, but nobody ever bothered us. We pitched two great army tents and another smaller tent. The smaller tent was for Grandma and Grandpa Raynor who came up from Florida every summer. One Army tent was occupied by my Aunt Hattie and Uncle Roy. My uncle was in charge of the Coast Guard station in Westhampton called Potunk. Uncle Roy came when he could, but Aunt Hattie and their two girls, Emma and Norma, stayed on.

The other Army tent was for the Penny family. My father and brother, Willie, were both Electrolux salesmen and went to work from camp. Mother, of course, was chief cook and bottle washer, always taking time out for a swim or to gather a few clams. We kids did the same, including my cousin Billy Raynor, who was my age and was raised by Grandma and Grandpa Raynor. Billy’s father died of typhoid fever when Billy was five years old. He was the only Raynor heir, so Grandma and Grandpa were anxious to raise them. His mother, Aunt Ramona, was a teacher and she consented to let them raise Billy.

Getting back to camp. Our relatives from other places looked forward to visiting us on Long Island and especially liked camping with us. They thought it was unique and great fun. There was always room for more.

When it was time for supper, the women called for the men to quit their clamming and come in and to eat. It was like pulling teeth to get Grandpa Raynor out of the water. We camped there all one summer. It was a carefree time.

Springy Banks was even more fun. It was such a delightful place. We were right on the water with woods behind us. We even had a privy up in the woods. Such conveniences! A freshwater spring came tumbling down the banks (thus the name Springy Banks). Papa rigged up a box at the foot of the springs. It was there that we kept our milk, butter, watermelon and other perishables – our own private icebox.

There were several tents, relatives and friends. It was a carefree time, especially for us kids. We went barefoot, of course, living in shorts and tank tops or a swimsuit. Cousins and friends went swimming together, sometimes clamming or gathering shells, pretty pebbles and sea glass. We walked the beach and went exploring in the woods.

It was a sad day when we had to break camp, go back home and think about school starting. 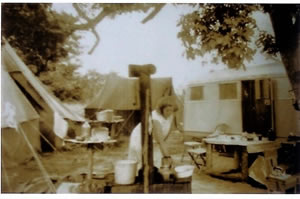