Crossing the Texas Border Without ID

Back in June we shared the story of the Texas Tower tragedy.  To briefly refresh, Texas Tower #4 was a radar tower built by the US Air Force approximately 70 miles nearly straight south of Hampton Bays; yes, in the middle of the ocean.  Standing on the seabed, it collapsed, killing all on board.  The story didn’t end there, the lives of the 28 men lost touched not just our hometown but the eastern end of Long Island.

One of the men lost was a resident of Hampton Bays.  Staff Sgt Wilbur Kovarick was aboard the Tower during the disaster and his body was never found – in fact, only two bodies were ever found.  Not much is known by us about Mr. Kovarick.  From newspapers we have gleaned the following: SSgt Kovarik was 37 and a 17-year Air Force veteran.  He and his wife Edna married in 1956 and moved here from Colorado Springs, residing on Suffolk Road.  He was an Elk.  He was due for a promotion and transfer to Westhampton Air Force Base.

Edna had two sons by a previous marriage,  Charles Robert and Aubrey Woolsey, Jr.  There is a Southampton Press photo from 1961 of Mrs. Kovarick mailing a letter to President John F. Kennedy asking that her airman son Aubrey be transferred to Westhampton Air Force Base so that he could help her after being widowed.

One can only imagine the struggles she and her family faced.  It is sad to think these are the only memories this family would have from our Hamlet.  We thought perhaps someone would remember them, but no one has spoken up.  We’d like to think that he has not been completely forgotten.

Well, on that note, we have a little story for you that will ensure, we think, that you never forget Staff Sgt Wilbur Kovarick of Hampton Bays and Texas Tower #4.

Approximately eight months after the disaster, a “Smithtown Skipper”, Capt. Axel Endresen, went scalloping off the coast of Virginia.  What he dredged up was clothing, which was believed to be from the tragedy, so they were returned to the sea.  When his scallop haul was sent to market, it was discovered that one 4 inch wide scallop had clamped itself around a wallet – a wallet belonging to Wilbur Kovarick.  Kovarick’s ID, other personal papers and a religious medal which had been blessed by the Pope, were all intact and returned to Mrs. Kovarick.

The Museum of New Jersey Maritime History houses the largest collection of artifacts from the Texas Tower. Want more information on this terribly event?  Search google for the documentary:  “Doomed Tower At Sea”

The wallet is still in the possession of the Kovarick family. 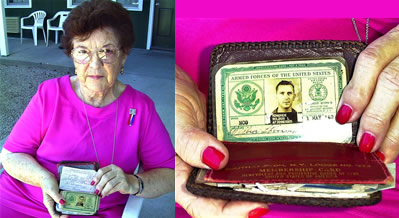