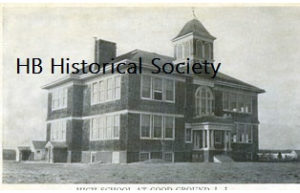 In February of 1907, a small group of residents of the hamlet of Good Ground gathered at the home of George Squires to discuss the establishment of Good Ground School District #5. The people of Good Ground – Hampton Bays! – have been celebrating ever since!

Prior to this time, the children of Good Ground attended one of the four one-room school houses in Ponquogue, Red Creek, Canoe Place or Springville. Over the next year, plans were made, bids secured and applications were submitted for the construction and establishment of a new school, a single school to combine the surrounding institutions into one. The winning bid of $114,990 for construction of the building was awarded to F.W. Jackson & Sons.

We do not know what prompted Mr. Squires and his neighbors to start planning a new school. It is said that at least one landowner wanted to sell his property and needed the one-room schoolhouse on his property to move. What we do know is that, at this time, only about 31 states required students aged 8-14 to attend school By 1910, 7% of America’s children attended school. It was another decade before all states required children to attend school; even then, only an elementary school education was required. The construction of a two-story wooden school house was an important event!
When the wooden school on Ponquogue Avenue opened in 1908, there were few automobiles and bus service was decades away. Most of the children got to school by “shanks’ mare” each day.

Shanks’ mare [like it’s spelled]
One’s own legs, esp. as a means of moving from one place to another. The only way we can get there is by shanks’ mare. Idiom; ride shanks’ mare, to go on foot rather than ride; walk. It was such a delightful day that we decided to ride shanks’ mare to the fair.

After the new school was built, the Canoe Place School was closed and the property sold. The children who attended the Ponquogue School, situated on Montauk Highway, carried the books and other items from the school and marched them through town, down Ponquogue Avenue, to their brand new school. The school was modern, with backhouses for both the girls and boys, which were separated by a wooden partition.

Back-house [bak-hous]
A building behind the main building, often serving a subsidiary purpose, a privy; outhouse.

During the last one hundred years, our school district has grown and changed, just as our country has. In 1908 the country elected William Howard Taft to succeed President Theodore Roosevelt. Today, another nineteen presidents have come and gone and the election process is starting up once again. In 1908, the very idea of American soldiers fighting in Europe was on few minds. Today, our soldiers are stationed on every continent in the world. In 1908, few Americans know what Paris looked like or what happened there; today, we can see Paris, France or Paris Hilton with a few clicks of a mouse. In 1908, only a crank thought of going to the moon.

Ce-le-brate [sel-uh-breyt]
To observe (a day) or commemorate (an event) with ceremonies or festivities; to celebrate the success of a new play; to make known publicly; proclaim; to praise widely or to present to widespread and favorable public notice.

As we commemorate our centennial, the old wooden school house is gone, the remaining structure renovated beyond recognition, and the school district has evolved into three separate school buildings and an administrative office. We can celebrate the thousands of children who have received their education passing through our doors. We can celebrate the hundreds of faculty and staff who have helped them find their way. We can celebrate the victories – and losses – on the courts and fields and the lessons learned from both. We can celebrate the many plays, recitals, and concerts, most good, some not, but all wonderful. We can celebrate the innumerable community events that have taken place at our schools, from Little League to Scouting to elections to food, book, and blood drives to theater to plane spotting to fund-raisers to dances. Mostly, we can celebrate all of the people of Hampton Bays – and Good Ground! – who have been a part of and supported the school over the past hundred years. That’s you!

grat·i·tude [grat-i-tood, -tyood
the quality or feeling of being grateful or thankful. He expressed his gratitude to everyone on the staff. Synonyms: thanks, thankfulness, appreciate, gratefulness

This committee would like to thank the many people who shared their memories and mementos with us for this publication. Also, we would like to thank the Hampton Bays Historical Society for preserving our history and sharing it with us. It is our hope that this journal chronicles the changes in our schools and our lives during the last hundred years.