Smile for the camera! Say Cheese! Let’s take a selfie.

These are all relatively new ideas. It is said that the Brownie camera, which debuted in 1900, brought photography to the masses. No more shuffling off to a studio or having a roving photographer show up. Cameras were accessible and, for some at least, not too large of an expense.

Prior to the Brownie, there were a series of photographic methods. Photography progressed from Daguerreotype to ambrotype, followed by tintype and carte-de-visite and finally cabinet cards. This cutting-edge technology began in 1866 and continued till shortly after the Brownie arrived. The carte-de-viste are square photos, while the latter are “portrait.” For today’s historic nugget, we are going to focus on cabinet cards.
What exactly is a cabinet card?

It is a photograph that is mounted on cardboard. It is slightly larger than its predecessor the carte-de-visite and the quality is better, the color (of the card stock) more vivid. They can be found in silver and black, as well as sepia. These cards often contained the name of the photographer and may have had ornate logos on the reverse. Initially used for landscapes, they quickly became very popular for portraits. Why the name? Because they were visible across the room if you displayed them in your “cabinet.”

Thanks to the internet, one can attempt to date their family photos. Sadly, not many people labeled photos. Or just put a first name, as though everyone would always know who that was. It is said that people didn’t smile prior to the Brownie’s advent because of the slowness of the photo process or because of poor dental hygiene. One of the other reasons is because it was felt that one looked more regal when not smiling or showing only the ghost of a smile. Having one’s own camera to snap away at will seemed to lighten us up!

Certainly, it was a very different era than we live in today, where some of us take dozens of pictures a day and send them to anyone who might care – and a few who don’t. But the cabinet cards were the high tech of the day, a then-modern marvel, a chance to see the faces of family and friends, no matter where they or you were.

Why the discussion on photos you may ask? Starting this Saturday, we are thrilled to be opening our two summer exhibits – Playing Hooky and Playing Around! Our hours are 10 – 1 and we do hope you can stop by. On display at the latter will be toys and other children’s items, as well as many cabinet cards from our collection. Sadly, most of these adorable little tykes are unknown to us. But who knows, perhaps you will find a familiar face looking back at you! 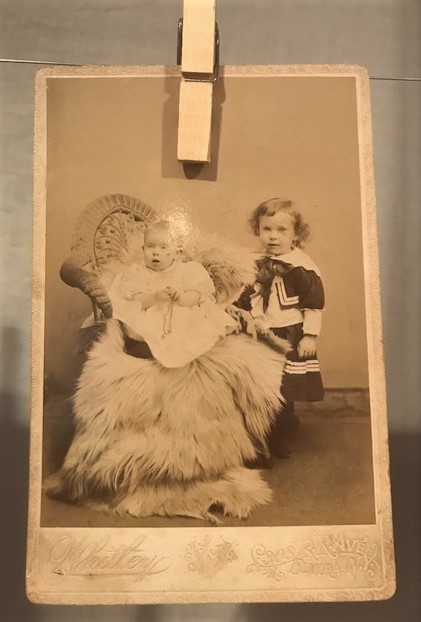