It’s that time of year again. Summer has faded, even though we still have some nice days, and children are headed back to school – or whatever passes for school this year. Fortunately, those challenges are for others to deal with. Our Society’s challenge is to show a glimpse of the past.

During the 19th and early 20th centuries, the majority of American children were educated in one-room schoolhouses. Generally, one teacher, often an unmarried woman, would teach all students. There was no such thing as kindergarten, so typically a child would start with first grade and hopefully stay to finish the eighth grade. The number of students would vary, as few as six or as many as 40 or more. The population of the area was a consideration as to the number and the size of the schoolhouse.

In early days, there were no school districts as we would think of them. Parents in a given area would come together to build a schoolhouse – or rent space from a church – hire a teacher, and buy supplies, either individually or as a school. Only the parents paid and there were no taxes levied. These committees might have discussions on what was to be taught and what textbooks to use, but in most cases the parents would have similar circumstances and religions, although with the school running through only the Eighth Grade, rarely did they venture into areas that might be considered controversial- it was just basic subject matter. Maybe they would debate whether the schoolmarm had loose morals in her after-hours life or whether some students were getting special treatment, but not much more than that.

The students were seated with the youngest up in the front and the oldest towards the back of the room. Reading, writing, history, geography and arithmetic were taught. Memorization and recitation was the method of the day and older students often helped drill the younger. Blackboards and maps graced the walls. Homework was assigned and needed to be completed, in addition to the children’s home chores. A bell would remind tardy children to hurry in and get warmed by the potbelly stove. Switches, stools, and dunce hats were sometimes in evidence.

Due to the difficulty of transportation, a hamlet the size of Good Ground would have more than one schoolhouse, so children could walk there without too much time wasted. (In all kinds of weather. Up-hill both ways.) Springville, Ponquogue, Good Ground and Red Creek all boasted schoolhouses. In 1875, the Springville and Ponquogue Districts voted to consolidate. In 1907 the Springville District and Good Ground Districts were consolidated with an eye towards a larger building that would continue past 8th grade.

Following is a map notating schoolhouses on Long Island. This is not a complete listing, rather a compilation of those still standing or in use as of 1976. It is interesting to learn that some areas which today would be considered small, boasted more than one schoolhouse. Northville would be one – today, Northville’s claim to fame is a liquid fuels depot and some tourist agriculture.

We are sure you shall quickly glean that there are no remaining schoolhouses in Hampton Bays. Our readers must often pass by others though, such as the one on Flanders Road.

The Red Creek Schoolhouse is also popular, even though it no longer resides in Red Creek. This structure is owned and operated by the Southampton Historical Society. They purchased the building in 1953 from William Hubbard for $400. It was ferried across the canal by barge and installed on the Rogers Mansion property. It is believed to be one of the oldest one-room schoolhouses in New York State still standing. And, before you ask – no backsies! 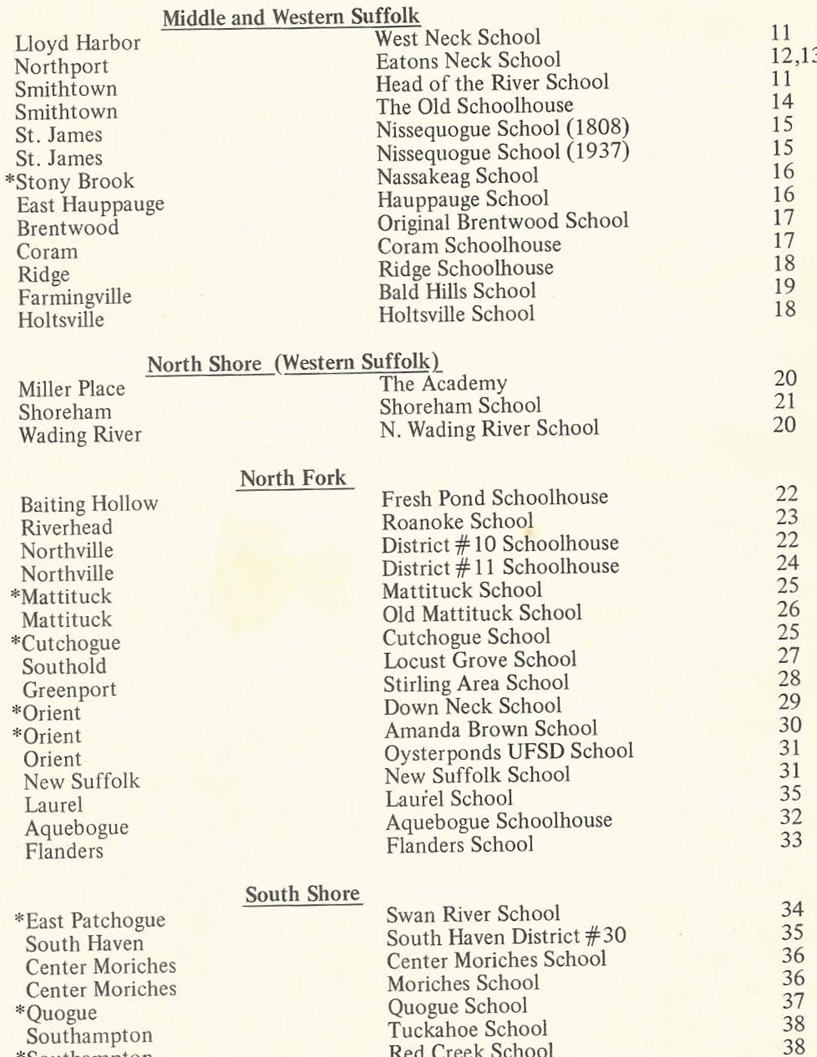