The weather is brisk and it’s a terrific day for a walk! (checking weather report to make sure it’s not pouring rain on Thursday. Okay, maybe a little rain.)

One of the reasons this blog – fancy, modern word there – was started, was because of our desire that history becomes a part of what we see around us. To that end, let’s take a quick stroll down a bit of Ponquogue Avenue, just to see what we see going down the block. 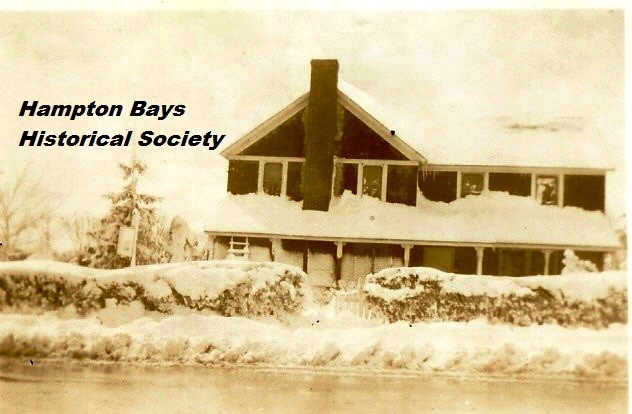 What kind of name is Ponquogue? Well, that is a bit of debate which involves Indian names, as well as the usual morphing of names due to lack of written words, misspellings and other changes. PonQuogue or Pon Quogue were popular spellings at one time. Regardless of how you spell it, Ponquogue is one of the hamlets that made up Good Ground. Of course, Good Ground was also a hamlet, mostly consisting of Main Street and south along Ponquogue Avenue, but was also a general name for the collection of hamlets that became Hampton Bays.

First up, the Hampton Bays Public Library. Over 90 years ago, the Hampton Bays Library Association held its first meeting. The Association operated out of a number of locations over the years until the Hampton Bays Public Library opened with a provisional charter in 1960 in a rented store-front on Main Street. In the same year, the Association sold a piece of property they had owned and purchased this current site at the corner of Ponquogue Avenue and Argonne Road. In 1962, the NY Telephone Co. donated and moved a portion of their old building which was located on Ponquogue Avenue across from Jackson’s Lumber Yard (currently Ricky’s plumbing) to the Ponquogue Avenue lot. The building was modified (read: majorly enlarged) several times over the following years.

After the construction was complete, the library collection was moved from its previous home on Montauk Hwy, next to the Firehouse. That building is still there, by the way, it had been a surveyor’s office. As best we can find, prior to the Library being next to the Firehouse, it was moved around, although no one seems to remember exactly from where to where. No, we are not talking about migrating buildings again, it was just the books that were moved. There is an article from 1940 which referenced a “Library Club” that was raising money and, in 1941. the school librarian Miss Dickinson was grateful to have received an additional 100 books! They were also asking for donations from the community.

This property was originally a dairy farm. It encompassed the piece across the street where the current Hand Aldrich Legion Post and the house next door sat. You know the house next door? Well, you will have to just remember it at this point, because it was recently lost to progress. The Legion was originally organized after World War I as the Eugene Hand Legion Post, located in Ponquogue (the hamlet) in the oval between Foster Avenue and Lighthouse Road. Gene Hand was a local boy who lost his life during the First World War. The post later relocated to its present location and, after the death of another local boy, John Aldrich, at the Battle of St. Lo, during World War II, the post changed its name.to honor both men.

As we hope you know, there is a monument on the property which lists all the names of those from Good Ground and Hampton Bays who served in World War I and II. It also notes those who gave their lives, LeRoy Squires, Eugene Hand, Michael Hornett and John Aldrich. For decades the Legion has honored our Veterans as well as sponsored our Memorial Day Parade. In the late 1960s the Legion also began a volunteer ambulance which was the predecessor to the current HB Ambulance.

in this house. You would pick up the phone and the operator would ask you who you wanted to call. Numbers weren’t a necessity because she (yes, they were pretty much always a “she”) knew everyone! Often she would tell you when someone wasn’t home or where they were. This building was in use before the building across the street, which was moved to become the library, was built. The brick building on the west side of the street is the current Phone Company building. As you travel north on Ponquogue, at the intersection with Fanning, you find the Switchboard. Before the arrival of the telephone company building and modern switching equipment, our phones were answered by a switchboard

Also on the west side, we currently find Scott Rothwell Funeral home. While it has been a funeral parlor for a few decades and the name has changed. It started it’s life as a boarding house owned by Emma Vail’s family. One of its claims to fame was a lovely ice cream parlor – my, don’t things change! Perhaps reinstating the ice cream parlor in the funeral parlor might help ease the pain of loss or something – we’d be willing to give it a try.
So, that was just a couple of blocks, from the railroad tracks to the library, and look how much history exists in that little space, plus a couple of links to other neighborhoods. It helps that the north end of Ponquogue is one of our major roads, but you could do something similar on at least half of the streets around here. Take a walk around your block, look at old maps of the area, maybe research property records, and ask neighbors for old photos.

You never know what you may find out.