I scream, you scream, we all scream for Ice Cream!

Nothing says summer better than Ice Cream and, in particular, Good Humor Ice Cream.  How many of our readers recall waiting for the Good Humor man to come around on a summer evening.  He only came by once so you’d better be ready with your change in hand. 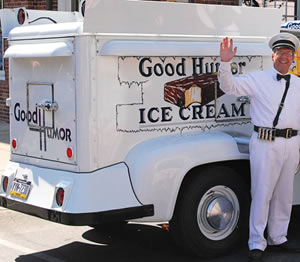 Two things came to light when we got the notion for this article.  First, Good Humor celebrates its 100th anniversary this year.  Gee, that’s a lot of Strawberry Shortcakes. Begun in Youngstown Ohio by confectioner Harry Burt, it took three years and a bucket full of ice cream bars for the patent to be granted. What made Good Humor so different?  The stick it seems.  This was the first time ice cream was delivered on a stick.   For more history you can sneak a peek at the Good Humor website.

Vice President of Good Humor Ice Cream, Joseph Meehan, was a summer resident of Southampton and, in fact, died there in 1972.  He and his wife could be found enjoying themselves at the Cruiser Club, among other venues.

Secondly, how many of our followers realized that the above phrase was an actual novelty song published in 1927. Following the success of the song, it became a jazz favorite in 1950.  Paul Winchell (comedian and ventriloquist) and Jerry Mahoney (a person of wood) recorded a popular version of the song.  Please note that this song is nearly a century old and would not be phrased quite this way today.

Oh! I scream, you scream, we all scream for ice cream!
In the land of ice and snows
Up among the Eskimos,
There’s a college known as Ogiwawa!

You should hear those college boys,
Gee, they make an awful noise
When they sing an Eskimo tra-la-la!
They’ve got a leader, big cheer leader,
Oh, what a guy!

He’s got a frozen face just like an Eskimo Pie!
When he says, “Come on, let’s go!”
Though it’s forty-five below,
This is what the Eskimos all holler: