In a Class by Ourselves

On Tuesday evening, our hamlet joined together to Congratulate the Graduates of the Class of 2022! The graduates lined up along the Ponquogue Bridge and those who cared to join the celebration drove past shouting their congratulations to these enthusiastic young men and women. This hagiographer, staring at yet another Thursday missive, couldn’t help but wonder what our favorite newspapers had to say about graduations gone by.
The first questions that popped into our minds was, were there graduations? We know that until approximately 1909, few students received an education past the 8th grade – if they even stuck it out that long. We are fairly sure that they weren’t actually considered to have graduated, as much as aged out. Of course, around this time of the year, articles abound comparing that old 8th grade education to today’s 12th grade education, with the modern version often coming up short.

It seems Good Ground may have been a bit ahead of its time because, in 1907, a group of residents decided to build one school building, which was completed in 1908. Prior to this existed the Common Schools, the well revered one room school houses which dotted the hamlet. Education was mandatory in New York State until the age of 14. Common Schools were not free. Parents paid a small tuition to educate their children, as well as provide housing for the teacher. Other commodities often would be offered in trade for tuition. We feel sure that fish would have been one such commodity.

Prior to 1892, there was no High School Curriculum. After its inception, most towns still did not offer a high school. Money would have been one reason. It costs a lot to build larger buildings and hire teachers, a major consideration when most young people would not be availing themselves of the facility. Should a child have the means and desire to continue past eighth grade, they had few options. They could travel to Patchogue to High School. Or to Southampton. 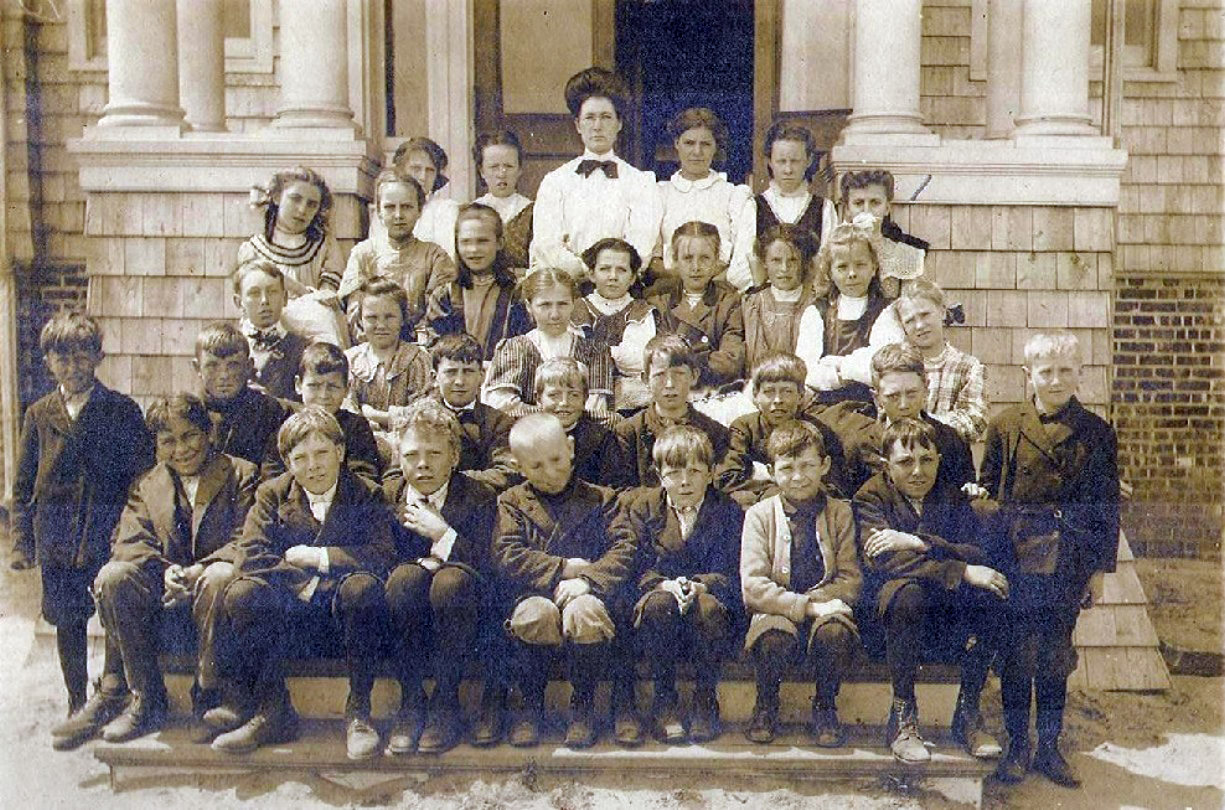 We found an article about two young Good Ground women, Evelyn Hubbard and Florence Wells, who graduated from Greenport Teachers Training Course. The following year Helen C. Penny attended the course. The attendees in the course were from a variety of places and we believe that this would have taken the place of attending a Normal School – that probably does not mean what you think it means. More investigation is necessary on that topic.

The first High School class graduated from Good Ground was in 1917. That and subsequent graduation ceremonies were held at the Church. Which Church? The Methodist of course. At that time, it was still the only game in town. We aren’t sure why they were held there. Our best guess would be that it had more room than the school. It doesn’t seem that the school had an auditorium or the equivalent.

Over in Southampton, graduations were held at Agawam Hall – not the present structure, but a wooden building on Main Street – most likely for the same reason. By 1923, it was reported that they were held in the High School Auditorium.

We don’t know who decided to go where, but we do know, thanks to our trusty newspapers, that at least one local favorite attended Southampton.

1914
Dr. Emma Bellows was a graduate of Southampton. In her book – if you do not know her book, you must resign from the Society immediately! – she described taking the train to attend class. She had a long and successful life, unlike this poor boy.

It seems Walter went swimming with some friends and he went in and they never saw him again. Perhaps he hit his head when he dove in. Very sad to see someone lost so young.

Back to Good Ground, In 1918 there were two graduates. Yes, two. Helen and Joseph Penny. Siblings or cousins, we do not know. Helen, it would seem, left for Greenport to study teaching. In 1931, we graduated three students, all girls. By 1933 our graduating class numbered six students. One boy and five girls. Things surely have grown since then, but we have no doubt that the excitement of graduation existed then as now.
We’d be remiss if we didn’t mention one special graduate, Hayden Bevis. Mr. Bevis is the winner of this year’s Hampton Bays Historical Society Scholarship. We are pleased to say that he is pursuing a career teaching History!
We wish for the Class of 2022 all the best that life has to offer.

“The direction in which education starts a man will determine his future.”
– Plato
“The future belongs to those who believe in the beauty of their dreams.”
– Eleanor Roosevelt