There is no property in our hamlet, nor in our town, that has a more storied existence than the Canoe Place Inn. Starting its life in the 1600s as a “trading station,” according to a 1910 news article, the inn has been reinvented throughout the centuries. It has housed British soldiers, hosted presidents, monarchs and bootleggers.

Were we to tell you the story of the inn from start to finish we’d need to write an opus. But in the interest of expediency, we are going to focus today on the early 1900s, when our illustrious inn was under the ownership of one Ernest A. Buchmuller. Buchmuller was a German immigrant who had arrived in Good Ground after a tenure at the Waldorf Astoria in Manhattan. Born and raised in Germany, his name changed at some point from Puchmuller to Buchmuller.

He took the reins of the Canoe Place Inn in 1902 He made many improvements to the property, but kept the “antique surroundings” for which it was known. The original brick fireplace and other relics added to the ambiance of the majestic hotel. As the only road to points east passed by the front door, it was a wildly popular stopping off place, as well as a destination for visitors. Thousands of tourists and motorists visited each year. There was also a Long Island Railroad stop – from time to time, sometimes officially, sometimes unofficially – along the back of the property. 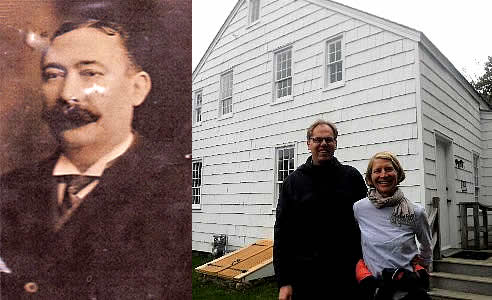 Ernest was also responsible for dredging out a harbor in the bay for yachtsman, according to the same news article. It seems that the Shinnecock Canal was in need of repairs, the banks were said to be washing away, which the state was ignoring. The result was called Buchmuller’s Hole and it formed the basis of what is now the basin at Spellman’s Marina.

As an aside, Ernest’s brother, August Puchmuller, was also an innkeeper. He operated the Long Island House in Riverhead, the Miamogue Hotel in South Jamesport and owned the Puchmuller Inn in East Quogue on Weesuck Avenue. Sadly, that structure was torn down in 1936.

Sadly Mr. Buchmuller passed away in 1916 with his wife Anna following him six months later. Leaving his step-son Louis to run the establishment. Louis was no stranger to the hospitality business having spent time as the cashier at Luchow’s and the Hotel Astor in Manhattan. By 1920 Louis had sold the Inn to Julius Keller

Last summer we received an email enquiring – an e-quire? – about the Canoe Place Inn from a great-great-nephew of Ernest. What a happy surprise that was! A few months later, we were all a-tingle to host Jens Puchmuller and his wife Almuth, from Germany. They took a brief walk through the Prosper King House and the Lyzon Hat Shop, before a quick stop at the inn. Jens had found articles on the possible demise of the inn and was naturally most pleased to find her still standing and getting a facelift.

Jens has provided us with many of the above details on the Buchmullers and their move to the United States “in the hope of finding prosperity, peace and freedom.” It seems that everyone who touches the inn is touched in return – and touches us all. Which is very touching, especially at this time, when touching is barely even allowed.