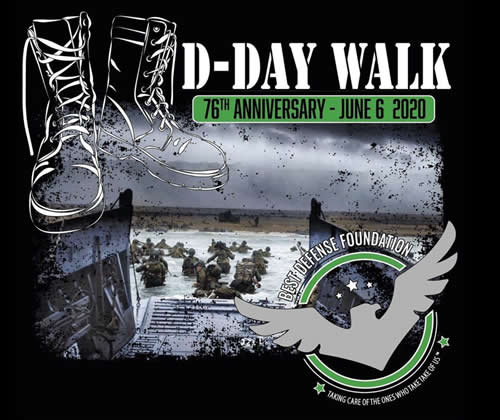 Today is the 4th of June. We are sure you are all pleased we could help you out with that, but you probably would have figured it out on your own. What is special about June 4th? Well, it is two days before June 6th. Clearly.

76 years ago this Saturday, our allied forces stormed the beaches of Normandy and all of our lives were never the same.

No, really, these events shaped the lives of our parents and grandparents, making them the people they became. If they were on the homefront, they experienced shortages and held paper and metal drives etc., to support the troops. Our neighbors were involved in guarding the canal or watching for planes with the Ground Observers for the Air Force. Spies landed on the beach in Amagansett, were captured by the local beach patrol, and the story is told that a local establishment had a waiter in their employ who was a spy.

Sending your children thousands of miles away to face the hardships of war must have affected all. The prospect of having them never return must have been unthinkable.

As the daughter of a World War II Veteran, my family had the honor of accompanying my Dad on a trip to France and the D-Day ceremonies a few years back. I must admit while on one hand I was, of course, looking forward to going on a vacation, on the other, I wasn’t sure what to expect. How many military museums can one enjoy at one time. Not very big on blood and guts. I had my reservations.

How wrong I was.

While there were a few museums to visit – and many, many cemeteries – history was provided to us by the veterans who joined us, as well as family members whose parents were no longer around. Two of our fellow travelers had fathers they never knew. One we visited in a Military Cemetery. A few had relatives who returned, but never to “normal” life. Others were accompanying their fathers on this journey and heard stories that were never spoken before. It was an extraordinary experience.

I was unprepared for the heart rending and often amazing stories – one Vet met his wife, who was from Poland, during the war. She worked in an Axis munitions factory where, when possible, she and the other workers would “short” the amount of powder put in the bombs. One day, the Vet thought he was dead when a bomb landed at his feet…only to discover it was a dud. Was it from her factory?

What I was most unprepared for were the French people. We were put up in the homes of residents for a few nights. Yes, these total strangers graciously opened their homes to a group of forty odd just because of a tenuous connection to a war that had occurred, quite possibly, before they were born.

They were saying thank you. Thank you to the men and women who gave their sons so that the French could enjoy their way of life. Thank you on behalf of those who were never able to show their thanks. American Flags fly in and around Normandy daily. These kind people went out of their way wherever possible to say thank you. Our veterans were stopped on the street and thanked. When visiting local landmarks, residents would slowly come out of their homes to join us.

Word of World War II veterans in the vicinity spread like wildfire. No, this was not just the older generation. There are many reenactors of all ages who study the history of the war and were thrilled beyond belief to meet and greet our heroes. (First rule of Normandy: the men in the American fatigues quite possibly do not speak English) Some were children during the war. Some were not yet born. One man brought his granddaughter along (she travelled a few hours to join us) so that she could translate and thank these men, as he himself spoke not a word of English. It did not hamper his thanks. School children held ceremonies and gave gifts. “Lest we forget” are not just glib words that are spoken.

Life under Nazi rule must have been very bleak. Remember that France had surrendered, their country mostly intact. We are the ones who bombed their villages into rubble in order to defeat the enemy. Yet it is us that they thank, for their freedom, very profusely.

Recently, my father received a letter from a young French reenactor we met over there. He wrote to say Thank You. Thank you for our freedom and having given your youth for us.

To reel this into its conclusion, there are many organizations which remember our veterans here and abroad. One such can be found on the web or facebook, The Best Defense Foundation. Their mission: To Take Care of the Ones who Took Care of Us. This year, there shall be no ceremonies to mark D-Day at Normandy. Military Cemeteries abroad are closed.

But the Best Defense Foundation is asking us to join them for a walk on Saturday. Wherever you are, whenever you’d like, however far you’d like to go. Just walk.