Leading Them to Water

You may be curious as to why our exhibit for this year is sports fishing. One reason is that there are many people who like to fish. Plus we were offered these cool lures from Callahans on Dune Road as a loan. Also, boats, bays, piers, ocean – it is sort of a given for this area. If this were Indiana, we would be writing about basketball.

Fishing affectionados, we think you will find something or even someone that you can catch up with. For those who are not fishing people, you may think this is a blind cast, but trust us, you will most likely catch something of interest. 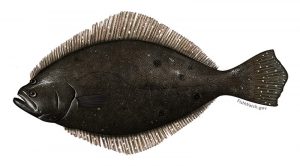 Maybe you are not a fishing enthusiast at all? Okay, but we can provide you with some local history.

It’s difficult to say exactly when Sports Fishing as an industry took off in our area. In the 1930s, the advent of reliable train refrigeration or ‘reefers’ made it possible to take a train from points west to the east end of Long Island to try your cast and bring back your catch before it started to stink from the heat. Googans (um, libertine fishermen) of all ages made this journey from the beginning of the season until the end of the season. It was touted that the Peconic Bay was home to the largest flounder, almost the size of a fluke!

According to the LIRR passenger agent, 33,950 passengers journeyed upon 99 different trains in 1937 to cast their line into our bay. The train would leave Penn Station at 5:50 am and end up in Montauk at 8:30 am, with a quick stop in Canoe Place along the way, and left Montauk for the return at 4:40 pm, all for the sum of $1.50. By 1953 the price had doubled. This service was discontinued somewhere in the mid 50s. Yeah, the automobile.

Many anglers would stick it out to The End and fish Montauk. Other wiser and more impatient anglers would jump off at Canoe Place. Where is there a train stop in Canoe Place, you ask? Hopefully you aren’t asking where Canoe Place is or we are falling down on the job (hint: there is an Inn there). There is no official stop at Canoe Place, although this has never prevented the LIRR from stopping. First on the west side of the canal to allow the aristocracy off at the Inn, then at “a short cinder platform” east of the Canal for the hoi polloi.

The pisacators would leap off the train and rush to their favorite boat. At that time there were no limits as to how many were allowed on a boat. Boats filled up and you didn’t want to be left on the dock. Life preservers were available but not used, as it was considered to be a slight against the Captain; you wouldn’t want him to think you didn’t trust him after all. Much better to fall overboard and hope you can swim.

After spending the day trying their luck on the water, the process would be reversed. The sunburnt anglers catch would be stowed on ice in the specially designed Railway Express Agency Car. Hence the name, the Fish Train.

It was a common practice for many years to go down to the canal and purchase the catch of the day right from the boat – predecessor of the Farm to Table craze.

Well, there you have it – we’ve done our best to lure you in! Hope we’ve done a decent job of hook setting and we’ll reel in some lunkers!