Amongst all the not so good things that are occurring in 2020, we are happy to report that there will also be something to dazzle us! Yes, the Perseid meteor shower is right here, right now. All you night owls now have a wonderful reason for staying up past midnight.

If there are no clouds. If humidity is low. If you are not near a streetlight.

Colloquially known as falling or shooting stars, meteors pass through the earth’s atmosphere creating a celestial light show as they go – it is just friction, really, creating sparks – massive sparks!

The first recorded meteor shower was in 1799 off the Florida Keys. It was certainly not the first shower ever seen, but perhaps the first one that did not entail running to the local priest for absolution. These shows take place at varying times during the calendar year and require a perfect sky for them to be easily visible.

Meteors fall to earth in sizes varying from small grains to a meter in diameter. Actually, they can – on thankfully rare occasions – be much larger than that, creating new lakes, ecosystems, and boundary layers in the process and removing entire species in the resulting conflagration. This level of pyrotechnics has not been recorded in modern history, even if you include the Tunguska explosion, but if such a thing were to happen, well, let us just say that it would not be out of character for 2020.

When researching meteors in our area, because surely there had to be some, we discovered that, in the 1900s, meteor silk was a popular fabric.

Curious as to how that was made.

Also, it came to light that one of the local steamships out of Sag Harbor was The Meteor. 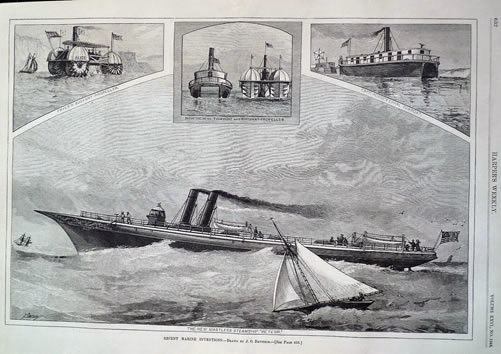 The meteor that snagged our attention however, was the one that fell in Amagansett in 1907.

A meteor 75’ in circumference fell into the ocean off the Amagansett Life Saving Station. A loud roaring sound was heard along with a “stream of fire from its zenith to the ocean surface.” We could type out the rest for you, but why not just read the original article below.