Man of the Khaki 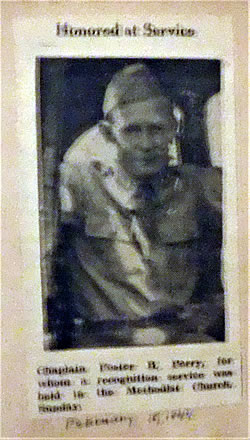 It will surprise none of our readers to learn that through the decades, even centuries, a variety of people have wandered through our hamlet, leaving in their wake a variety of marks, some vast, some half vast. One individual on the vast side was Rev. Foster Perry.

Perry was born and raised in Connecticut. Despite this upbringing, he succeeded in charting his own course, as he attended seminary and was ordained as a Methodist Minister in 1932. Among other appointments, he was, for a few years, the minister at our local Methodist Church.
In 1941, Rev. Perry asked to be released from his contract here in order that he could become a chaplain in the Reserve Corps of the US Army. The church received a declaration from the government, thanking them for giving Rev. Perry to our country.

As the war began, stories of this type played out up and down the island and across the nation. The war impacted more than just those who were called to fight, but also those who stayed behind. Piano store owner Harold Hornbeck was pressed into service as a shop teacher. Mrs. Chester Jacobs assumed the position of Southampton Town Tax Collector, tasked with forcing the rest of us to assume the position and freeing up her husband to join the service. These changes were common practice as those who could not serve were called upon to fill in for those who could. Rosie the Riveter built ships and planes, while George Bailey fought the Battle of Bedford Falls.

As for Rev. Perry, he stayed in the service after the war, twenty-one years in all, rising to become a Lt. Colonel in what eventually became the US Air Force. He was stationed in Australia and New Guinea, in various states in the US, beginning in Maine, and served during the Korean War.

Upon retirement from the military in 1962, he returned to Long Island, where he served as Minister of the Bridgehampton Methodist Church. He was active in the community, the Historical Society – need we say more – and started a photography club for teenagers. Retirement was not to last long, however. He passed away in 1968 at the age of 62, survived by his wife Esther and two sons, one of whom followed his father’s footsteps into the seminary. Afterwards, Esther returned to Hampton Bays and our United Methodist Church, where she was an active member for many years.