One topic that crops up quite often while reading old newspapers or documents is house moving. No not moving from one house to the other, but actually moving the entire house. This was seemingly a very common practice and most likely a less expensive one than in today’s world.

There are still those who move buildings. Our Society moved the Lyzon Hat Shop, just from one lot to the next, and also moved the Canoe Place Chapel down the hill.

A glance through the papers has Frank Tuttle, Jr. buying and moving a part of the “old schoolhouse’ next to his property in order to build a new dwelling. No word on what happened to the other part.

In 1908, the old school building in Bridgehampton was rolled up the street to Wainscott, where it was to become a meetinghouse for the Church Society. We would have loved to have seen that sight. It seems they were forced to use Main Street to avoid lots of turns.

JO Hopping was a popular house mover. He also moved around a bit himself, as he moved a home on Shelter Island from one spot to the next. One wonders if these structures still stand and if the current inhabitants realize their home was uprooted and replanted – might explain that recurring rip in the wallpaper. He also moved the South Hampton Postmaster’s house to Culver Hill Road and FIrst Neck Lane. This occurred in 1899 – we wonder if Culver Hill Road is currently Culver Street. Many changes happen over time and later peoples are often none the wiser.

The Masonic Hall in Sag Harbor was dragged by the house mover Field over to the corner of Union and Church Street and plopped on a new foundation, where it was remodeled. It was said to be a ‘heavy job and close work’ – that sounds like an understatement. The job was completed without accident, which we just sort of suspect was rare.

Sadly the same can not be said for all moves. In 1905, G. Chauncey Osborne of Amagansett was helping Mover Field move a building up a slight incline, when a chain broke and the house began to slip backwards. Brave Chauncey tried to stop the sliding structure with a board, but ended up being crushed. He had a broken leg and the physician suspected other broken bones. Lesson learned, Chauncey decided that painting houses was a better career than moving them.

As our dear readers most likely know, much of the cost involved in moving a house today is removing, temporarily, the overhead wires. Back then, wires would often be torn down when encountered if the structure was too tall – or, perhaps, the wires were too low. This was put to a stop in 1906, when the Telephone Company brought suit against Edmund Phillips, a Quogue Housemover, who asked for wires to be raised, but didn’t want to pay the $50 it would cost. Seems the house sat in the middle of the road for a few days while the dickering took place.

In one happy event, over in Riverhead, WF Jessup was moving the Ostrander house and found “a considerable amount of money.” This treasure was said to be Spanish and American gold, as well as some silver and paper notes.

It seems that not everyone was a fan of the house movers. When a tree was in the way of “some old shack” that was being moved, the movers would just hack the tree up to get it out of the way. This must have been a recurring issue, because in 1916, the local supreme court issued edicts protecting the trees. In some instances, the damage to the shade trees was said to be higher than the value of the building.

Years went by and houses continued to migrate. In Good Ground, Boss Wyman moved the Smith house to the back of its lot. Other times, houses were moved to the front or side of a lot. We assume they were making room for more houses.

We know that the Lyzon started on the south side of Montauk Highway and moved to the north; the Methodist Parsonage was moved from approximately where the Methodist Church is today up the street to land across from the Firehouse where it lived its life as the Hornett House and gas station. The Canoe Place Chapel had an earlier move from where it is today, up the hill to where it was till we moved it back down the hill – and it probably hopes we have finally made up our minds about it. During the first move a piece was chopped off and slid over the ice to the Shinnecock Indian Reservation.

There are scores of incidences of houses and other structures being moved. In one situation, right in our very own Rampasture, a house was cut into three pieces, then two pieces were moved onto neighboring lots and each was expanded into a new house. Clever actually.

In 1914 WIlliam Wines – a name, apparently, and not a brand – bought a cottage in Good Ground, but wished to live in East Quogue. Best solution: he put it on a scow and towed it with motorboats across the bay. After an entire afternoon, the scow was still a few miles away from its destination. A wind came up and a subsequent cry was given in the village that help was needed. About a dozen people with motors responded, but it was after mid-night before the structure arrived at its new home. So remember, when towing a house, always check the weather first.

Our predecessors spent a lot of time moving houses. We do not have any reports of house versus house collisions, but we suspect it must have happened somewhere at some time. We rarely move structures today, unless there is some cultural imperative, like returning the Big Duck to Flanders. The overhead wire issue alone is close to insurmountable – imagine the penalty if you knocked out power and communications to large groups of your neighbors.

Still, you would think the previous generations would have left well enough alone and just left the houses where they were. Were building materials in such short supply? Was moving to a new house so difficult or unaffordable? Were the original locations such bad neighborhoods? We may never know. Meanwhile, we wonder if looking out the window at moving houses inspired the game of Monopoly. 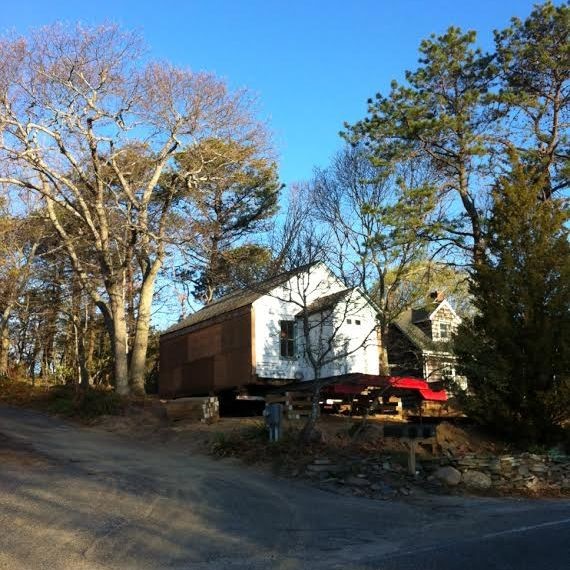