You will be pleased to hear that October is almost done, taking Archives Month with it, yet we feel compelled to address it one more time. Halloween is just a few days away, so it also seems a good time to tackle that subject. Have no fear; we can cram the two together in one article.

Or at least we will try.

cemetery
[ sem-i-ter-ee ]SH
an area set apart for or containing graves, tombs, or funeral urns
We are sure our readers are clever enough to connect Halloween with a cemetery. But an archive?

Well, if you think about it – or if you have to make it fit – a cemetery is really a great big archive! It contains people – people who make up the story of our past.

While there are more than one cemetery in our hamlet, for today’s purposes we shall haunt the Good Ground Cemetery, right there behind the Methodist Church.

It started its life as the Methodist Cemetery. As one wag once said, no good Catholic would be caught dead being buried there. Ahem. That is why most Catholic folks were buried in Southampton at Sacred Hearts or perhaps St. Johns in Riverhead. Yes, that has obviously changed, but for much of history, the only way for a Catholic to get to heaven was by slumbering in a Catholic cemetery.

We are not sure exactly why the Methodist Cemetery became the Good Ground Cemetery, but we have a pretty healthy guess: The Soldier’s Cemetery, on the corner of Main Street and Ponquogue, was vanishing, most likely because the powers that be thought a cemetery wasn’t as much of a Main Street money-maker as, say, a restaurant. Smart actually.

The good soldiers were disinterred and relocated to the newly-named Good Ground. This lovely spectacle probably took place circa 1882, the official start of the cemetery under its current name. We suspect that the Cemetery Association would have this info, but we had not really thought of that until right this moment and we cannot stop the presses now.

So, now that we have addressed the history OF the cemetery, let us see what we have for history IN our cemetery – or, as we call it, the skeletal archive.

There are all types of people. We have a comedian in our midst, Greg Giraldo. Danielle Anne Delie lost her life on 9/11. Beethoven – the dog – crossed the Rainbow Bridge.

Mary Smith Bellows claims the longest in the cemetery prize; she was born in 1760, died in 1796, and was the wife of John Bellows III, a Revolutionary War soldier. The couple had four sons that we know of, two of whom are also buried there. Imagine if we could talk to these spirits! What did Good Ground look like in the 1700s? We know there were woods, we know there was a road, and we know there was an Inn.

Speaking of which, Anna and Ernest Buchmuller, a German immigrant who owned the Canoe Place Inn for a time before laying down his knife and fork, can be found at rest, as can Annie and Charles Baumuller, also German immigrants, who operated the Montauk Hotel.

William W. Jackson is a familiar name. Jackson and lumber go hand in hand in this town. Mr. Jackson was often called to be a juror for the courts in Riverhead. William’s father, Sylvanus (!), donated the land for the cemetery, while William was a longtime cemetery board member. When the younger Jackson was called to eternal rest, the Cemetery Association extolled his virtues, expressing their great loss. In 1919, he left behind an estate worth $4,500, which was divided between his children and widow.

Not surprisingly, among those pushing up daisies, we find many of those who chose a seafaring life. William T. Conklin (1842 – 1917) took to the high seas at a young age according to his obituary. He sailed with many “Long Island masters” and worked at the Catherine Street Ferry in the city. He was said to share many stories of his time at sea and visits to “strange lands.” Raise your hand if you wish someone had jotted those memories down!

Edward H. Howland was 33 and stationed at the Shinnecock Coast Guard Station when he bid adieu to earthly scenes in 1919, struck down by influenza.

Wesley Squires was a whaling captain before we went to Davy Jones’s locker in 1896. While William H. Squires, captain of the schooner Louis V. Place, arrived at the Heavenly Shores after his ship was wrecked. 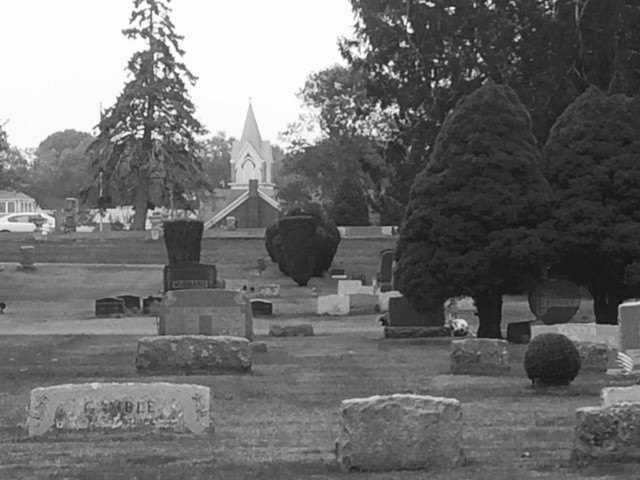 Do not kid yourself that only angels are amongst us. While we shall protect the names of the culprits, in 1894 a group of young men, some of whom chose our cemetery when they were later put to bed with a shovel, were arrested In Pon Quogue for throwing stale eggs and putting dead eels on the ‘piazza’ of a neighbor’s home. Guns were fired and the horseblock was overturned. All this on Christmas Eve. Nothing says Merry Christmas like some dead eels! The evil doers were fined $10 each.

A man of the cloth, Rev. A.R. Eagan, joined the Choir Invisible in 1907, when he was struck down by pneumonia. He also had a side gig as an insurance agent. Seems he was heavily invested in matters of life and death.

All manor of disease have caused the demise of our residents – dropsey, Bright’s disease, influenza, not to mention cancers of all varieties. Alcohol would have contributed to a fair percentage of the clientele. There are infants and newborns, as well as a few centenarians! A few favorite teachers ended their earthly career with earth. Soldiers who served our country in pretty much every war ended up here. Some came home, while others did not.

They were individuals from all walks of life, who are only connected by the fact that they are no longer counted in the census.

Yes, it is an archive of a different sort. Few things are more historic than a cemetery.