On the Right Path

It is time to turn the page. We realize we’ve been a bit stuck on the same subject. Did we mention our museums are now open two days a week from 10 – 1? Oh wait, we may have. (Friday & Saturday!)

Today we thought we’d cycle back to the late 1800s, to a time when cars were a dream and horses, and their exhaust, still ruled the roads. 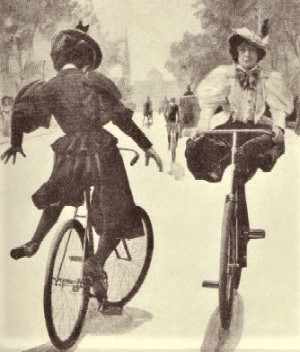 Yes, the bicycle had evolved into a machine that was much easier to handle and that women could operate with ease. Bicycle paths were common. Good roads were important for cycling and paved the way – literally – for automobiles.

The League of American Wheelmen were one of the voices for better roads. Perhaps you know a road named Bicycle Path which starts in Port Jefferson and ends in Selden. Yep, it really was a bicycle path and it used to go all the way south to Patchogue. Merrick Highway was also a well loved “bicycle path” back in the 1890s. Just try that today!

The bicycle craze took off when the Penny Farthing (gigantic wheel at the front, tiny wheel at the back) was replaced by the safety bike. What’s the difference? Well for one, you didn’t need a step ladder to climb up on a safety bike. The wheels were the same size, a chain and sprocket helped turn both wheels and you could touch the ground when one needed to stop. The first safety bikes in the US were manufactured in Chicopee Massachusetts by the Overman Wheel Company in 1882. Bicycle races and parades became great entertainment. Women were able to migrate from their adult tricycles which were good for a spin around the park, to two wheels, the freedom to get out of the kitchen and Bloomers. No wonder that period was known as the Gay 90s!

“Let me tell you what I think about bicycling. It has done more to emancipate women than anything else in this world. It gives her a feeling of self-reliance and independence the moment she takes her seat; and away she goes, the picture of untrammelled womanhood. I stand and rejoice every time I see a woman on a wheel . . .”
— Suffragette Susan B. Anthony in a Feb 2, 1896 speech, quoted in the New York World

While the working man now had reasonable and reliable transportation that he didn’t need to feed and water, the bicycle also became a source of fun after the work day. Cycling clubs became popular and bicycling expeditions – anything over an hour – were common. The LIRR joined the craze by enabling visitors to our area to put their bikes on the train as baggage without cost.

Our archives provided us with a booklet entitled “Cyclist Paradise.” It details routes for the scorchers as well as those for the road rider. In 1898, according to the booklet, there was a macadam road which stretched all the way from the city to Patchogue! Train fares, if you wanted to just do a quick tour, were 3 cents a mile, one way, or 2.5 cents for excursion tickets, while Wheel Clubs got the bargain basement price of 2 cents a mile. Ferries, fishing boats, and boarding houses, as well as the conditions to be expected on the paths at each stop, were all clearly detailed for the reader.

As the Wheel gained popularity, Wheelman were asked to stay off the sidewalks and fines were levied on those who didn’t follow the rules. Bike paths were encouraged, because keeping cyclists off the sidewalks put them instead on the road and we all know how well that works. While cyclists were kept off the roadway, an article in the Easthampton Star voiced the complaints by the local Wheelman Club that cars and cows needed to stay off the bike paths. By 1899, licenses were available for $5 and if you were caught without one there was a penalty of $25 or 25 days in jail.

Bike Paths sprouted up all around. In Southampton, a bike path was created from the Village limits on Main Street to Hampton Park. No, we have no clue where that would be but we trust one of our fellow historical societies could answer that question. In Sag Harbor, a bike path was built from the Village to Hardscrabble. Another one ran from Water Mill to Bridgehampton. The cost for this was $150! The bike path across Shinnecock was damaged by a “miscreant driving a horse and wagon across the length.” The path was solid enough to hold a wheel, but not enough to hold a hooves and wheels. And yes, there was a bike path from Good Ground which was seven miles long and went to Flanders.

So, there was a brief few decades when bicycles were not just for children and hobbyists, but were actual transportation for many people. The exercise probably did them good, while riding in a storm probably did not. An infrastructure was built for them and the remnants of all that still exists in small corners of our world today. 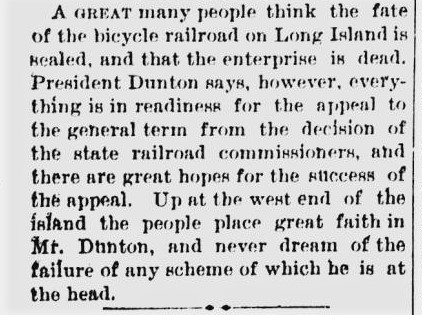