There are weeks where putting pen to paper or, um, cursor to ether, is easier than others. This week we resorted to On This Day in History, for a bit of inspiration. In the interest of clarity, this event actually did not occur on this day or even on the day this was written, but somewhere in the middle. Here we go. 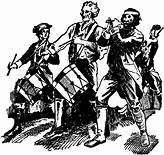 On the 21st of September, 1780, a man committed treason. Also on that day, the name Benedict Arnold became synonymous with the word traitor.

Yes, that Benedict Arnold, for those who are asleep at the computer. He came from a long line of Benedict Arnolds – no, not traitors, just people with questionable naming skills. His great-grandfather Benedict was the Governor of Rhode Island Colony, His grandfather, father and older brother who died in infancy also shared the name. We are not sure how many, if any, followed him.

Benedict Arnold was born across the Sound in Norwich, CT. He served an apprenticeship with an apothecary, aka a pharmacist. He also owned a fleet of ships and did a bit of smuggling (all for a good cause, of course) before joining the Militia during the French and Indian War. While his fame is that of being a traitor, he had a decent military career, although he wasn’t terribly well liked and was said to possess a short temper, before taking his misstep.

How do we know the exact date of this act? It was the date on which he met with John Andre’ and offered to hand over West Point to the British.

It seems feasible that this was in his mind for a while. We doubt you wake up one day and decide it’s a great day for committing treason, especially after being a ‘brave and skillful leader’ in the militia for years. He was hoping for a high ranking position in the British Army, as well as money, so perhaps he thought if he stayed where he was he’d be on the losing side. His fall from grace, as it were, from Son of Liberty to turncoat, must have taken time to occur. All we have now is supposition of what precipitated this act.

While Benedict and his treason is well known, Major John Andre’ may be less so. He was born in London and by the age of 21 had joined the British Army and was sent to serve in Canada. He was subsequently promoted and ended up in the soon-to-be US. We believe we’ve told at least bits of this story before, so a gold star to those who recognize the name as well as his bit part in the history of Canoe Place.

Why Canoe Place? Well, Good Ground was decades away and Hampton Bays centuries, when Major John Andre billetted at the Canoe Place Inn while under the command of British General Henry Clinton. He was assigned to the fort which was perched atop the hill behind the Inn. While details may be short, Major Andre’ was something of an amateur artist and sketched, not only his own image, but also the view from the fort – all before engaging in conspiracy with Benedict Arnold.

We are very glad that, while he met the terrible end of many spies, he did at least contribute to our hamlet’s history! The traitor made a mark on a young country, while the spy made a mark on a crossroad on the path to the wilds of the Hamptons.
“HE WAS MORE UNFORTUNATE THAN CRIMINAL.”
“AN ACCOMPLISHED MAN AND GALLANT OFFICER.”
GEORGE WASHINGTON.