read a February 1806 Boston newspaper.  “A vessel has cleared at the Custom House for Martinique with a cargo of ice.  We hope this will not prove a slippery speculation.“

In today’s age, we don’t give much thought to ice and how valuable it is to our everyday lives.  Ice can be made in our refrigerators or procured at a large number of stores.  In our fridge, our milk is fresh, our lettuce crisp, our butter hard and our meat unspoilt – except for that bit hidden behind the egg container.  There was a time in our past when these things were a luxury.

Those of us of a certain age will remember having “ice boxes” in the home.  It served the same purpose that the refrigerator serves today and was usually in or near the kitchen.  It had an opening in the top where a block of ice would go to provide the cooling.  Items you wanted to keep frozen – rare, and it would not be so for long – were stored near the block of ice, while items that simply needed to be kept cool would be placed elsewhere.  New ice blocks were delivered on a regular basis.  Even after these ice boxes became obsolete in the home – most were retired by the 1950s – they were still common in cabin cruisers and campers.

Ice Harvesting was a waiting game, Ice was harvested when it was approximately 7-12 inches thick. Hoping for several weeks of freezing temperatures, followed by a rush night and day to get the ice cut and housed.  This undertaking was also not without it’s dangers. 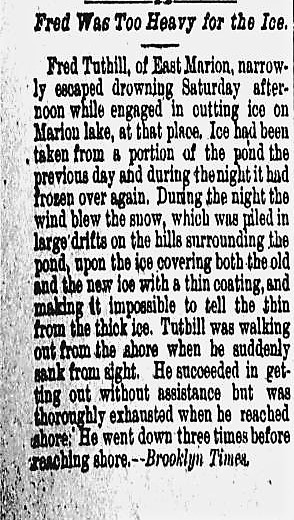 The ice would be stored in double-walled ice houses, with seaweed, (as you know seaweed is good insulation!)  salt hay, or sawdust placed between each layer to prevent the slabs from freezing to each other, and used throughout the next year by the townspeople.  Ice stored in these houses would last well into the summer, when it was relied upon to preserve food.

The first step would be to clear away any accumulating snow on the freezing ice, to allow for uniform blocks which could be more easily stacked and stored.  Depending on the body of water from where the ice was being harvested, the ice would have to hold men, equipment and horses.  Depending on the severity of the winter, it would be easier, or more difficult, to cut thick slabs of ice.  Due to the low salinity and lack of a tide in our bays prior to 1938, it was very common for the bay to freeze over and ice to be harvested there. Small farms would have “ice pits” where they stored chunk ice for their own use.  Holzman Duck farm had one.  There was an ice house located on Canoe Place Road and owned by the Warner family as well as in Ramasture.  There is still a standing ice house on Argonne Road, by the end of Lynn Avenue, which has been converted to a garage.

Quogue Ice Company occupied the property which is today the Quogue Wildlife Refuge.  They harvested ice on the various ponds in the immediate area.  The Refuge still has an ice house, which is home to some of the original equipment used by the ice company employees. Take a look the next time you visit. 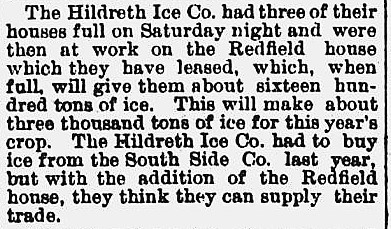 Ice from small ponds, the ice would be thinner, 3-4 inches thick.  The thinner pieces of ice were slid under other pieces of ice without insulation, so they would freeze together to create a larger block.

Local historian Emma Bellows tells of her uncle’s ice house, which stored ice cut from Bellows Pond.  The building was a three story structure with a conveyor belt which carried the cut ice.  A horse connected to a wheel was driven in circles to create the power for the belt.  Yes, exactly, it was a one-horsepower engine.  The ice was scored 3” deep by a tool similar to a harrow, which was pulled by a horse, to create a guide for the men to cut the ice into uniform blocks.  Using saws 5’ long, the blocks were cut and pushed into a sluiceway to the conveyor belt.  Blocks were a minimum of 6” thick and 2’ square.  1’ of straw would be placed under each block, with 4” on either side to prevent melting.

Since not all areas are surrounded by water, nor is all water suitable for consumption, the ice trade was a booming business in our area as well as upstate and throughout the northeast.  Ice would be harvested here and shipped to other areas.  According to the New York Tribune in 1900, “one can buy ice from the {Ice} Trust for 30 cents if he is poor, for 40 cents if he is a good ‘kicker’, and 60 cents is the rate for such as are willing to pay for it.”

Due to a variety of factors, by 1925, many of the local ice companies were merging.  The advent of electricity reduced the need for horses to power the conveyor belt.  Concerns over the safety of natural ice due to pollution, aided the growth of manufactured ice. Savvy icemen began to build or buy ice plants to allow their businesses to continue rather than rely on the vagaries of the changing natural ice industry. The Natural Ice Association of America was formed.  The mission was to convince the public that natural ice was more sensible since it melted less slowly than manufactured ice.  No, we haven’t put this to a test.

Fuel & Ice companies starting at this time.  They delivered ice in the summer and coal in the winter.  Many such-named companies still exist today.

Good Ground’s Iceman was Frank Squires.  Initially Mr. Squires harvested his own ice and delivered it by horse and wagon.  Eventually he would supply his ice from a manufactured ice plant which was located in Southampton behind the movie theatre.

Today, whatever is left of the ice-making business is strictly commercial and most businesses that do not need LOTS of ice have their own ice-makers.  Home deliveries are a thing of the past.  A hundred years ago, an ice plant would have been seen as a good investment.  How many industries from today will still be around in even fifty years?