Have you ever had problems with road signs? Of course you have, we all do. They are too small, they are too beat up, they are in the wrong place. You can see them clearly in your side window as you whiz past your exit, but that is about the only time.

Yet we think that, by the end of this article, you will consider yourself lucky to have road signs.

While it is often touted that good fences make good neighbors, good fences are also useful to define boundary lines. But prior to the use of fences, trees were used to mark boundaries. Okay, trees in the woods marking boundaries do not sound terribly useful, yet it seems to have worked well enough. These trees were often referred to as lob trees.

It was, of course, the Native Americans, woefully short on proper signage and reflective paint, who began the use of trees to communicate with others. Later on, European pioneers continued the process.

Lob trees were used in a variety of ways. They would depict borders or give directions. Sometimes the limbs were cut off half way up the tree, which left a distinctive tree with many branches above and below. These were mostly used as markers. 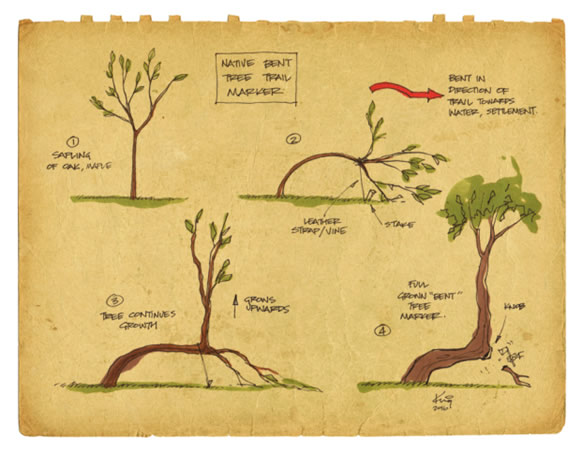 Locally, you often find trees that were bent as saplings. A few of these were found in the woods by the old school’s baseball field (so, very old school). The most recognized one still stands at East Landing and has been used as a perch to wipe sand from beachgoers feet for decades!

We could say more about this, but the truth is that somebody else has already done all the work, so we are just going to give you a link to follow. So, go on and, as we used to say in the 1970s, get bent!

https://www.littlethings.com/native-american-trees/8
You may glean some additional information from the following:
http hats-Up-With-These-Bent-Trees-In-The-Woods-/