The Water of Life

I guess it is no surprise that a fluid whose literal translation is “water of life” – uisge in Gaelic and aqua vitae in Latin- has had a range of uses for centuries. First distilled by monks in Ireland and Scotland, whiskey (or whisky) has been useful as both an external antibiotic and an internal anesthetic.

So why monks? Well monasteries had all the necessary ingredients: fresh water, fresh grains, as well as manpower – obviously, it is in the name – and plenty of time. Monasteries also had libraries, at a time when most didn’t read, plus herb gardens and were often used as hospitals for parishioners. Since illness was seen as a punishment from God, who better to cure one’s ills? Hence, the addition of whiskey to their arsenal was a likely one. Sure beats heck out of bleeding and purging. 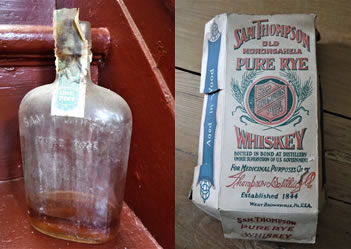 Why the ‘e’ or lack of one? Once, at a Whisky tasting – (Why, being rare drinkers, were we at a whiskey tasting? One of those vacation things. Yes, the kids made us do it.) – we learned that it was used to denote where the whiskey was distilled. Ireland uses the “e,” while Scotland does not. There was more, but we do not remember it. Perhaps the monks wanted to credit where it was made, but it was also a time when spelling was much a matter of opinion anyway.

Alcohol was used throughout our history in a variety of ways. George Washington was quoted as saying “The benefits arising from the moderate use of strong liquor have been experienced in all armies and are not to be disputed.” Yes, Eighteenth Century and, besides, he just spoke that way.

Years later, during the Civil War, whiskey was valuable due to its ability to help the soldiers relax from stress and carnage of war, but also it was often the only anesthetic that was available. Two ounces of 90-proof whiskey is said to raise the threshold for pain by 45% for two hours. Uh-huh; tell that to the guy getting his leg sawed off. Applying the bottle to the side of his head might have been kinder.

While laudanum and quinine were used medicinally, they were not widely available. The fiscally struggling Confederacy declared a prohibition of alcohol, making it available for soldiers, and we suspect about as effective as prohibition ever is. The cost of a gallon of whiskey in 1863 was $35, up from 25 cents a few years before – helpful information for those who buy whiskey by the gallon.

Then there is the story of Samuel J. Thompson of West Brownsville, Pennsylvania. He was a farmer when, in 1844, he won a distillery in a card game. While he knew nothing about making whiskey, Samuel threw himself into his new venture and grew the business into a major distillery.

We at the Hampton Bays Historical Society are the proud owners of one of his whiskey bottles – complete with box – which is how we stumbled onto this topic in the first place. How we ended up with this treasure is unknown. We should note that it was empty when we got it. Mostly.