The Wheel of History

After a volcanic eruption – from Mt. Tambora, in Indonesia, in 1815 – led to massive failure of crops worldwide in 1816, The Year Without a Summer, resulting in the massive death of horses, a replacement for the trusty steed was sought.  The two-wheeled, steerable, human-propelled machine, commonly called a velocipede, was the result. 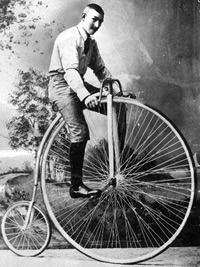 This first bicycle – coined as a running machine – is said to have been invented in 1818 in Germany, but it was many decades before a good design was finally settled upon. The first bicycle was straight from front to back and wooden. There followed a variety of styles: two large wheels with a seat between, a large front wheel with small wheels in the back, or a large back wheel with a small wheel in the front. It was a few decades before the advent of pedals, so the bike was propelled in Flintstone fashion, by kicking the ground, and stopped by grabbing the wheel with one’s hand. We cannot think of a more uncomfortable mode of transportation, yet the world persisted with the habit and designs for the rolling health hazard only improved with time.

The first bicycle with pedals – attached to the front wheel, similar to today’s tricycle – was The Boneshaker. It was an exceedingly uncomfortable ride, due to the rigid wrought-iron frame, wooden wheels and iron tires.
Yes, iron tires.

Rubber tires were finally used on the “Penny Farthing” – a British invention from the 1860s – but they were just solid rubber around a metal wheel. Next came pneumatic tires, a cushion of air that made cyclist’s lives more comfortable and kicked off the cycling craze of the 1880s and the formation of the League of American Wheelman. Cycling clubs sprang up and racing and touring became the rage. 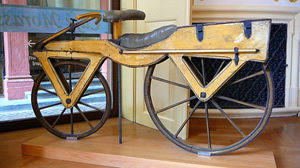 Due to the lack of paved roads, cyclists took to pedestrian walkways, which of course was not popular with pedestrians. Thus it has been law for over a century that bicyclists must ride on and observe the rules of the roadways. At the time, many roads were nothing more than muddy pits during the rainy season, sunbaked hard ruts during the summer, and icy pits during the winter, hardly suitable for use by wheels. Perhaps this was the reason that Fall became popular as a biking season.

Locally, a bicycle tax was begun which was supposed to improve the bike paths, but seemed to have been diverted to road improvements – how some things never change. The original bike paths were built by private subscription. Bicycles were far more common than automobiles before 1900 – as, we suspect, were inflammatory afflictions of the nether regions. It was the Wheelman who advocated for better roads, harnessing their voices into a political movement – The Good Roads Movement. They also provided enthusiasts with maps of each state with detailed roads for the cyclists to plan their tour.

By 1900, East Hampton claimed 500 wheelman and the local papers reported that a “veteran wheelman,” who made a three day tour of Suffolk County, covered 131 miles and only had to walk his bike for 20 of them. By 1900, a fifty-cent license tag was required for Wheelman, the proceeds of which went to the improvement or repair of paths.

So, when you are out driving on the street and become encumbered by a bicyclist blocking the road, remember that bicycles have an important history. Should you then decide to also make the rider history, well, although your feelings are understandable, we certainly will not condone your actions.