Perusing the historic newspapers the other day – of course we do, don’t you? – an article caught our eye. It was a lovely recount of a birthday for a local resident who was celebrating her 95th birthday. Mrs. George Hildreth.

Skimming the story once, then twice, I realized that something was missing. Something tickled the brain. Lovely article. Lots of familiar names attending a party for an obviously well-loved woman. Pretty poem in her honor. Family, friends, location, number of cakes. Hmmm, oh. Right.

It seems Mrs Hildreth did not have a first name! 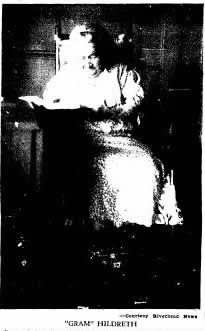 That’s right, her 95th birthday was big news, above the fold in the County Review Riverhead. There is even a photo. But not once does it mention her first name. As this is the 100th Anniversary of the Women’s Suffrage Movement and we are all woke now, this seems strange to us. But while uncommon now, it was not terribly uncommon in 1949 and especially before. Were you the sort to wander cemeteries (come on, we know others exist), it wouldn’t be unheard of to find an old stone that said no more than “Mrs. Jones” died on such and such a date. Sometimes her husband’s name was mentioned. Sometimes not. We’ve come a long way baby!

Rose Anna Wells Hildreth was born in PonQuogue in 1854 in the Molby Foster House. One could make the leap that Molby was her Grandfather, but that would only be a guess. She was the daughter of Ransford and Julia Foster Wells. She was the wife of George Hildreth. She and George decamped from PonQuogue to the wilds of Red Cedar Point at some point, where they raised their son George Jr and daughter Grace. Rose was widowed at a fairly early age, given her long life – perhaps the one allowed the other. She was a pillar of the Methodist Church (haven of widows) and was involved in community and family.

She also retained a very sharp memory, right up until her death, just shy of her 100th birthday. She was a repository of knowledge for family relations, as well as one of her favorite topics: the Civil War. She often recalled “the exodus of young men in response to President Lincoln’s call.”

We wish we had been able to do an oral history with her! Sadly, while she was well-revered, it is a fair bet that no one encouraged her to write down her memories, or jot them down themselves. Another bit of history lost. But thanks to a well written obituary and the digitization of newspapers, all is not lost. 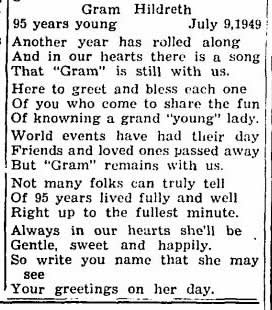