As time marches on, many businesses come and go. Some are with us for only a snippet of time – you know, summer businesses trying to outrun their creditors – while others endure. One such enduring business is the Villa Paul, owned by the wonderful Pensa Family. They are both our friends and neighbors and have been in business for “54 years and counting.”

While 54 years is a considerable amount of time, portions of the actual structure have been standing for well over 154 years!

According to census records, a log cabin was built on this site by Joseph and Phebe Brown in 1804. Mr. Brown was a farmer and, along with his wife and four children, lived and worked this land. Farms were quite common in our area, although it is difficult to imagine one there now.

The current restaurant’s restrooms are a portion of this original building. During the Brown’s ownership they served as the Borning or Birthing Rooms. These long narrow rooms were located close to the hearth to provide hot water.
The property eventually passed into the ownership of Judge Edward & Cora Lazansky. Judge Lazansky was elected to the State Supreme Court and was the New York Secretary of State. Obviously, they renovated. While this was now a summer residence, the Judge also presided in the Riverhead county court for a time. He passed away in 1955 and his wife followed him a year later.

After her passing, the estate held an auction for the items in “The Roost,” as their home was known. One of these items is said to be a Smith and Chase wall map of Suffolk County from 1858, which was recently donated to our Society and is proudly on display at the Lyzon.

Eventually, a man named Paul Villa bought the property and, as we are sure you guessed, turned it into a restaurant. Later on, the Pensa family bought it from him. 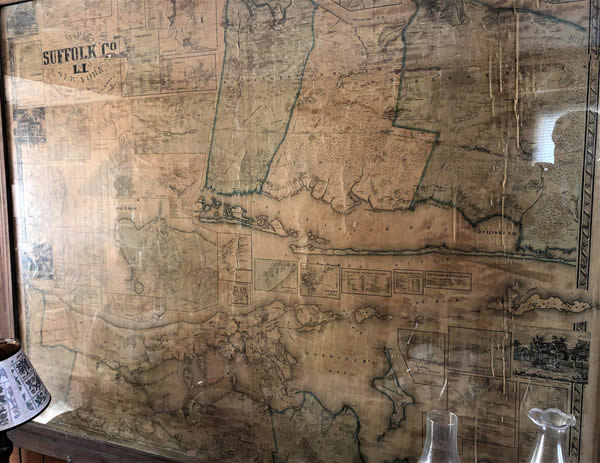 Yes, yes, there is a reason for this restaurant advertisement. Why you ask?

If you have not taken the opportunity to visit the Villa Paul, now you can kill two birds with one stone, this very Sunday! There we will be hosting our annual benefit dinner. Tickets are $45 a person, $12 for children under 12. This includes tax, tip, wonderful fellow diners and fabulous food! Tickets are available at the door and we take credit cards.

Hope to see you there!