What’s In A Name?

What’s in a name? Some people will say “not much,” while others find them very important. Those that found names important are the reason why, as of Valentine’s Day in 1922, our hamlet is known as Hampton Bays! (And, Gentlemen, consider this a helpful reminder to check this week’s calendar!)

Christened Good Ground in 1738, this area of Southampton Town was part of the original settlement. According to The History of Long Island, “A little west of the middle highway was a tract of land somewhat better than its surroundings, and called “the good ground,” from which the hamlet derived its name.”

As time went by, the very thought that we were “somewhat better” than our surroundings, had evolved into we need to be named for our surrounding region. Our predecessors desired to be part of The Hamptons – so help them! – and to have that reflected in our name They believed that a better name would help the hamlet grow. Judge Wauhope Lynn, amongst others, was an advocate of the change.

According to the Seaside Times, this change was being discussed prior to 1900. Other names were considered. Two years earlier, the name Bay Head was decided upon and approved by the Southampton Town Board. While the Railroad did in fact change the name of the station, it soon changed it back, because it had never been legally adopted. Bay Hampton was a contender, but thought to be too easily confused with Bridgehampton or Binghamton.

The new moniker was kicked about for a few years, till finally a petition was circulated and the majority supported the change. There were, of course, holdouts, who felt that the old name was good enough for them and it would have been good enough for their descendants. Not surprisingly, most of our little group would probably have been on the “Remain” side as well, what with us being historically driven and all.

Be that as it may, the Good Ground Postmaster was re-appointed as the Hampton Bays Postmaster, with the railroad station changing shortly after. The names of Springville, PonQuogue, Canoe Place et al were rolled into one name: Hampton Bays. So help us! 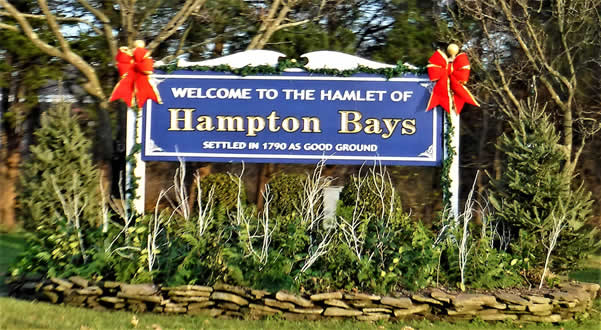