When Hampton Bays Lost its Faculty

Last week, you will remember, Mrs Elizabeth Jackson, then Miss Betty Harmon, and her roommate Alice Davis, had arrived in the newly renamed Hampton Bays to take teaching positions in the school. With Labor Day Weekend over, they had walked up to the school for their first faculty meeting. They quickly learned that, because of a “kerfuffle” the year before, the staff (with one exception) and the entire school board were as new as they were. Mrs Jackson takes up the story: 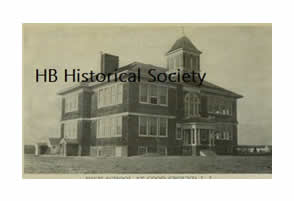 ——————————————————————————————————–So, an entirely new Board, with no educational experience, was faced with hiring an entirely new faculty! That’s why, in their eagerness to fill jobs, they had hired us both! Sight unseen! But when the new principal came to assigning positions, he rightly had to do so on a basis of seniority.
I (with plans for my Latin and French classes dancing in my head) found there had been three teachers hired for those subjects; the other two were older and more experienced teachers. I ended up with spelling, eighth-grade arithmetic, geography, and penmanship. My roommate fared only slightly better.

To add insult to injury, we found that there were exactly fourteen students in the whole high school. Our work would be almost like tutoring. The beautiful building we had seen from the road the day before was not yet completed, so we would be using the old wooden building until the first of the year. Lunches would have to be eaten in the primitive boys’ and girls’ basements, all classes, first through twelfth, crowded together. (I had one class in a girls’ cloakroom!)
Editor’s Note: for those who do not know, the old wooden building survived until the 1960s. The beautiful new building she writes of still exists, nearly a hundred years later – it is the older portion of our elementary school, with the columns out front.

All in all, it wasn’t the beginning we had hoped for. And the day was not yet over. After the lengthy meeting was adjourned, we still had to walk on to Greenberg’s store to stock our little kitchen.

Then, the long walk home. And this became the pattern of our days. I think we consumed a million Aunt Jemima’s pancakes that first year, simply because we were too tired at night to prepare anything else. I don’t care if I never see another pancake!
We loved the children – after they learned that, though young, we meant business – but we missed the fun and companionship of people our own age. There seemed to be a firm dividing line between the “natives” and “us,” and no matter how hard we might batter at it, that line held firm. Thank goodness, I have lived to see the breakdown of that division.

The end of September brought our first paychecks. We took the afternoon train to Southampton to open our precious accounts in the savings bank. Now we could write checks for the agency, and for our rent. We were really on our way.

The one thing we wanted so much to do was to see the ocean. Coming, as we did, from central Pennsylvania towns, the ocean intrigued, but eluded us. Each monthly visit to Southampton found us, after our banking chores, walking and walking toward that tantalizing roar in the distance. We never could quite make it before it was time to turn back for our train to Hampton Bays. 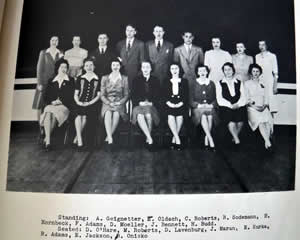 We had started, the day after Labor Day, to mark off the days on the calendar, thankful that one day was over. We were homesick, disillusioned, and discouraged. However, by Christmas vacation, the disappointments had faded. We enjoyed our work with the children, if not the subject matter. We were deeply involved in extra-curricular activities. We had gotten used to walking. The people, though not exactly warm, had seemed to accept us. (Probably as necessary evils!) And I had met the man who was to “light up my life!” He had taken us, in his little old Model T Ford, to see the Ocean! Hampton Bays and the world was beautiful!

We will leave the story here. Be comforted that, despite this rocky start, Betty settled into the community and found her niche and her husband.

For those of you who are new to the area, yet seem to find the name Betty Jackson familiar, you must have visited the Hampton Bays Library. Built in 1962, Betty was the head librarian there until 1982.