As historians (not sure when that happened), one of our objectives is for readers to see the past, while they are living in the present. What do you see when you look at the Coast Guard Station? Do you see the current buildings? Or perhaps you envision yourself as standing on Ponquogue Point looking at a tall red lighthouse. Do you see the Blacksmith Shops as you travel down Main Street? Or the farm land on Ponquogue? We hope that Lynn and Wauhope now have a meaning other than just roads with random names.

Our Society is the proud owner of a painting of Rampasture by artist Kanute Felix (1852 – 1935). He studied art in Stockholm and Paris and served in the Swedish Army before immigrating to the United States. Mr. Felix was Swedish by birth and was known to paint pictures of the coast and water – which pretty much describes Sweden. Felix was a companion of artists John Moran and Francis Murphy and travelled extensively. Besides being a talented artist he was an accomplished pianist and violinist. He maintained studios in Paris and New York.

Felix was said to be the creator of Felix Park in Florida. Trusty Google informs us that Felix Park is in Miami-Dade County and has houses which are “anyone’s dream come true!” Hmm, he was a developer as well as artist, pianist and violinist? – we are just going to watch the game on TV.

At any rate, how did this talented man come to bring his palette to Good Ground?
Gracecrest.

Gracecrest was a boarding house which was situated on the shore in East Tiana, owned by Kanute’s daughter, Grace Felix Lesster. While visiting with his daughter, he painted our treasure.

The painting looks south from the East Tiana shore towards Rampasture. And yes, this is one of those moments in which an historic view can easily be compared to a contemporary one.

We’ve taken a new photo for comparison. Will you ever look at Rampasture the same way again? 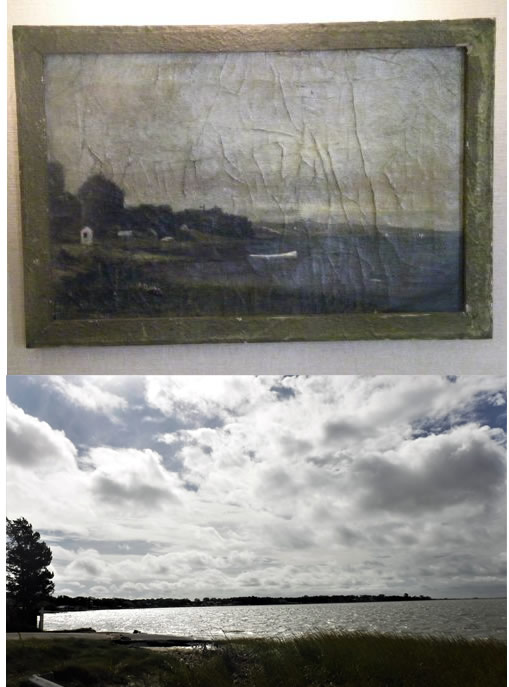