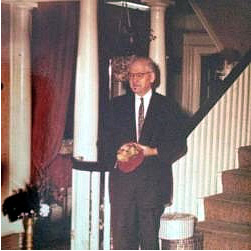 The Lyzon Hat Shop started it’s life as a general store, as many of you already know.  For those of you who have not visited the Lyzon Hat Shop Museum, trust me when I say that it’s come a long way from that meager beginning.  When and how did this transition take place?

Walter King originally styled his hats from fabric left over from the general store – which, being that era’s version of a KMart, sold many types of goods.  As his creations gained popularity, he realized that, along with the growth of the business, the store needed to undergo a metamorphosis in keeping with the image of his glorious millinery perfections (aka: beautiful hats).  Therefore, in 1911, he hired prominent builder and master craftsman Elmer Jackson to help him renovate the store into his vision for a millinery mecca (aka: beautiful hat shop).

Elmer was born in Good Ground in 1890 to William Wakeman & Minnie Cecil Leek Jackson.   His adulthood home was situated where the defunct Friendly’s is today. Elmer was a staunch Methodist, a baseball player (right field), member of Bay Hampton Band, jury foreman, superintendent of the Canoe Place Chapel Sunday School, participant in minstrel shows and toastmaster, to name a few.  As a matter of fact, hardly a newspaper edition of the era goes by that does not have Mr. Jackson mentioned in some capacity or other. Whether buying a new buick or visiting, or being visited by, friends and relatives, Elmer is mentioned often. He died in 1976.

As secretary of the Baraca Club – a men’s Sunday school class –  he served with Walter King as president. This association quite possibly led to his being hired to do the carpentry at the Lyzon.  Mr. Jackson installed a sweeping staircase and many feet of beautiful dental molding. The upstairs sports a unique barrel ceiling, which adds to the opulence of the structure.

Recently we located our own craftsmen – name withheld to protect the introverted – to install a railing by the first two steps as you enter the building, between the main floor and the front showcase.  Some of our more wobbly visitors will appreciate having this to hang onto as they enter. However, what seemed like an easy job in planning became a real project for our talented craftsman, who anchored the posts and painstakingly matched the existing grand staircase railing.  We are thoroughly pleased with the results!

Before & After at The Lyzon Hat Shop

Take a look at our slideshow!